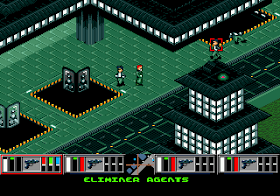 Genre: Action, Strategy / Tactics
Perspective: Bird's-eye view
Visual: Isometric
Pacing: Real-Time
Setting: Cyberpunk / Dark Sci-Fi
Published by: Electronic Arts
Developed by: Bullfrog Productions
Released: 1994
Platforms: SEGA Genesis / Mega Drive, 3DO Interactive Multiplayer, Atari Jaguar, Super Nintendo (SNES), DOS
In 1993, the company Bullfrog Productions under the Aegis, then the giant of the gaming market Electronic Arts- produces one (in my opinion) of the best strategic and tactical games on the Sega platform. Checking the knowledge of gamers? What is Bullfrog Productions known for? So, the head of the studio is the legendary Peter Molyneux!
Although I do not consider him as such an outstanding personality, but as long as he did not wear out on a creative plane, he made excellent games. A few years before Syndicate, they released the excellent Populas, which I adored.
The initial "video" - which already caused the first surprise (because it was Sega) perfectly introduced the course and you already in the first seconds understood. In this world will survive the strongest. Only money has power. Human life is nothing.
Transnational companies grew, their profits competed with the GDP of small countries. Soon, small countries were dissolved in the vast womb of corporate monsters. Corporations did not shy away from absorbing smaller companies, as the Whales with plankton in the northern seas do. 2096 year. Three huge corporations divide the market of terrestrial and human resources. American, European and Asian. Three whales of the ruling world through the prism of commerce and cruelty. Undemocratic. Unselectable. The rulers.
The European corporation supplies the market with the latest invention-a chip that allows changing perceptions. It does not matter that the land is ravaged by Mother Earth and the whole world looks like a huge garbage dump, people saw the beauty of lakes and waterfalls, and from the mirror looked at them incredibly beautiful people. Billion-dollar sales of the chip followed worldwide.
Like any drug, the chip was an excellent means of controlling people. But the technology got to the criminal syndicates and pirated chips were used to punch the way for bandit groups into power. The world has become a hell. Hell is where man is only a weapon. It became fragmented as a feudal Europe and each region had its own laws.
So for whom are you playing? As a matter of fact, you are a young and ambitious head of a small European about the syndicate, from your airship (how they famously explained the isometric view? A?) Managing completely control people-cyborgs, stuffed with deadly electronics.
In general, the goal of the game is to capture the world with the help of bribery, sabotage and chaos on the territory of the enemy. The game was able to combine economic and strategic elements. You could set taxes on your territories, but you could get an uprising or strike back from other syndicates. Also, you selected (as in civilization) the blueprints for which you sponsored research and which made your cyborgs more deadly.
Before the mission began, there was a briefing at the end of which you got the goal and the way of capture. Whether it is sabotage or seizure, or can total destruction. You trained a team of killers of 4 people. The cyborg settings were insanely flexible and not every game now you will encounter similar.
A huge number of weapons from the uzi to the flamethrower and the time bombs. Allowing to arrange a total destruction of all livestock.
Fully customizable body parts. Boards to increase brain reaction, new legs for fast running and hands for more accurate shooting. In the settings you can dig for ever.
Design-100 points showed the gloom and devastation of the world. And pseudo 3D, in particular models of people and transport, could not but rejoice. And yet, and yet, it was the first game where I could get into the car and crush people !!!!! GTA element could not help but rejoice ... the machine could be taken any ... Of the chips, developers were also allowed to enter buildings and organize massacres even there!
In the end, one of the best games on Sega. Excellent Cyberpunk and wonderful memories. I really hope that the Poles will make a good game because except for Deus Ex- normal cyber punk is very small. And the genre is very interesting. It is close to us - the society of consumers and people who depend on phones!

A password that allows you to select a level, have mega agents and a lot of money - HACKER5QVAD.
16 agents, full armament and 31 seized territories - FCMTZ 00000 0132W VOG.
‹
›
Home
View web version