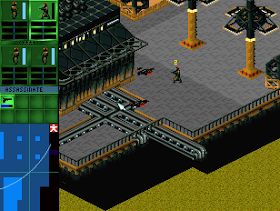 Genre: Action, Strategy / Tactics
Perspective: Bird's-eye view
Visual: Isometric
Pacing: Real-Time
Setting: Cyberpunk / Dark Sci-Fi
Published by: Electronic Arts
Developed by: Bullfrog Productions
Released: 1995
Platforms: 3DO Interactive Multiplayer, Atari Jaguar, Super Nintendo (SNES), SEGA Genesis / Mega Drive, DOS
Syndicate is an excellent game for Panasonic 3DO performed in cyberpunk style. The game takes place in 2096, there are already all the criminal syndicates running. And we will lead one of them. What would be to assert their rights in the territory and eventually take over them. But it will not be a bloody war of people against people, or people against cars, it will be the battles of cyborgs. While each of the residents has a special chip in their heads that changes the reality in one direction or another, depending on which group controls the situation. We have to perform a variety of tasks. At first, we will have only one pistol from the weapon, but in time we will increase our arsenal. Interestingly, in the game you can sit down and drive a car, so there is some analogy with the game Grand Theft Auto (GTA). You can also be knocked down by a car or shot by someone. In the game there is both a strategic and tactical part, in addition to constant scuffles and conflicts, we will have to pursue economic policy in our territories in the form of taxes and other means to receive money, just do not overdo it and call your rule a rebellion and insurrection.

The menu at start of game allows:
CONFIGURE COMPANY - configure the campaign,
BEGIN MISSION - start the mission,
LOAD AND SAVE GAME - download or save the game,
RESTART GAME - start the game again.
Starting the mission, you will see a map of the world. Different colors of regions mean the influence of different syndicates. The bottom of the screen, in the middle, indicates the population in the selected territory (POP), the taxation of the region (TAX; "unknown" means "unknown"; if the region switches to you, you will be able to establish a tax to your advantage), the region's ownership (OWN ). If "brief" is written in the lower left corner, then you have established control in the neighboring region and now you can deal with it (or it's the initial mission: you have to destroy a certain object in the territory that is now selected by the cursor).
On the mission description screen, you can buy additional information (INFO) or increase the radius of the radar (ENHANCE).
On the TEAM SELECTING screen, the "research" item is for research purposes. Research is very expensive, do not start with them. Item "team" allows you to select a command, and "mods" - artificial organs. Such cybernetic implants are provided:
chest - chest, increasing vitality; get it first. The first thorax is metallic, the second - plastic, which increases mobility. The third one is composite, all organs are protected by the energy field, self-healing is provided;
legs - the legs that allow you to move faster - in second place in importance. The first number is oriented to fast movement, it is equipped with a hydraulic drive. Legs number two are plastic, improved balancing. In the legs-3 synthetic muscles are used, which provide an increased speed of movement;
heart is the heart that accelerates the reaction. The heart of the second version provides almost twice the pulse, which allows you to quickly consume hormones. The third heart is cybernetic, very economical and powerful;
Arms to carry more weapons. In the second version, the hydraulic system is improved, and in the third version synthetic muscles are used. Such hands allow you to carry heavy weapons, while maintaining the usual speed of movement;
Eyes - eyes that increase accuracy. Eyes-1 can be seen at night, eyes-2 - determine the nature of the target and the exact distance to it. Eyes-3 provide excellent visibility and a built-in sight, are economical;
Brain - brains (you know for what). Second brains are something like a coprocessor, intercepting routine functions. Brain-3 cerebral amplifier allows access to tactical information stored in the satellite information system.
To obtain improved models of organs, it is necessary to finance the corresponding research works.
Now, having completed with the implant organs by pressing B, proceed to "equip" - the weapon.
Reg-suadotron, or pertron (persuader) is designed to capture agents;
Pistol - the weakest weapon, but cheap;
Shotgun (its price, see cost, - 250) - the most powerful weapon available to you at the beginning;
but in general the most powerful weapon is a rocket launcher (gaussgun).
Uzi - compact, useful as long-range weapons in the early stages of the game.
Minigun (machine gun of the Gottling system) is shot.
Laser is indispensable where your main task is destruction.
Chiller - it's something like a flamethrower, but it does not spill fire, but liquid helium.
The rifle Dragunov (long rang) and the time bomb are convenient in terrorist attacks. Medikit (medical package) will restore health, and a personal shield (energy shield) will make you invulnerable to bullets. Of course, advanced weapons are only available to those who conduct scientific research.
"Accept" + A allows you to go on a mission.
There are only four cyborgs, but for the first mission one can confine oneself to using one. The cyborg involved is marked on the right side of the game screen. Below are eight "backpack" cells.
The arrow on the screen allows you to specify where the cyborg should go. To get it, press L + R. You can remove or remove weapons with the help of B. To hit the little man, move him to the arrow (it will turn into a target) and press A (if the object is within reach of the weapon of your cyborg, then the target changes color, becomes red). If the arrow placed on the building turns into a target - it means that there is an object of interest to you. If the arrow pointed to the corpse turns into a fork, then with the help of A a corpse can be taken away weapons.
Watch for the flashing word on the left side of the screen. This is the task for you.
ASSASINATE means to find and destroy.
PERSUADE - Persed with Perseudotron, i.e. convince the convict, (see about weapons).
ELIMINATE - eliminate enemy agents, ministers of law or security guards.
TAKE OBJECT-steal the object.
DESTROY - destroy anything.

Choose Configure Company, and enter the name as is: NGOR MAT.
You'll find every location on the map, along with a ton of money.
‹
›
Home
View web version