Batman: Return of the Joker (NES) 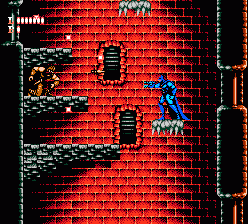 Genre: Action
Perspective: Side view
Visual: 2D scrolling
Gameplay: Platform
Published by: Sun Corporation of America
Developed by: Sun Electronics Corp.
Released: 1991
Platforms: Nintendo (NES), Game Boy, SEGA Genesis / Mega Drive, Super Nintendo (SNES)
The second game about the superhero Batman, released for the NES platform in late 1991. The plot of the sequel is this: The Joker has returned and started to wreak havoc and destruction, Batman will have to enter into battle with him and show who is the master in Gotham City.The gameplay in "Batman: Return of the Joker" is significantly different from the previous part of the game. In particular, now Batman does not use his harpoon, which previously helped him climb the hill. Famous "betarangs" are replaced by plasma weapons of several types, so that now no more melee - everything is decided by weapons. "Batmobile" and "batwing" in the game are not represented, but sometimes it becomes possible to fly on a jet pack.Graphics has undergone significant changes for the better, but at the same time retained the style of the series. The picture has become more beautiful and detailed, special effects just pleases the eye, the Batman figures and enemies are very large and well animated. The game is one of the most beautiful for the console, squeezing from the console almost everything that it is capable of. In general, the game has become more dynamic, and the player will need much more reaction for its passage.Battles with the bosses are also presented in a new way. The scales of Batman's lives and opponents are replaced by counters with certain values of numbers, they reflect the amount of health of the characters. Usually the boss has more health than Batman, so every decisive battle can be called "unequal" in advance.Here is how the game "GamePro (US)" was rated in December 1991: "The new part of the game will definitely not become a challenge for players as the original due to the introduction of a password system, but this should not deter you from buying. The best products of the year for the NES console, and it's not a joke! " (Rating: 80 out of 100)Or here is another quotation from the authoritative "Electronic Gaming Monthly" (November, 1991): "The game has the most beautiful visual effects that I have ever seen on the NES.And yet, despite significant graphic improvements, Something that made the first part so good.The gameplay is a platform level research and shooting at the enemies.And all this is decorated with very beautiful graphics".The game is definitely included in the gold fund games for the NES prefix, and you should definitely try it, even if you are not going to go through it.