Batman: Revenge of the Joker (SNES) 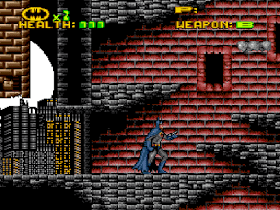 Genre: Action
Perspective: Side view
Visual: 2D scrolling
Gameplay: Platform
Published by: Sun Corporation of America
Developed by: Sun Electronics Corp.
Released: 1991
Platforms: Super Nintendo (SNES), SEGA Genesis / Mega Drive, Game Boy, Nintendo (NES)
On NES I remember there was such a masterpiece. When porting it to both SEGA Genesis and SNES, strangely enough, it did not change at all. Or maybe even lost a lot. Better, of course, immediately play the original. If we talk a little about the gameplay, here Batman does not use his fists and legs, as in many games, but picks up various firearms from the boxes and will certainly destroy the enemies that appear and the bosses waiting at the end of the locations. Each of these guns has its own powerful volley, which makes it even more interesting to play, but not in 16-bit versions of games. But to play this game on the NES is definitely worth it and necessary.
‹
›
Home
View web version