Batman: Return of the Joker (SEGA) 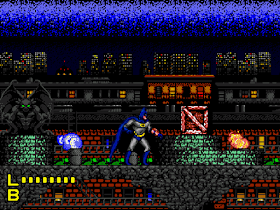 Genre: Action
Perspective: Side view
Visual: 2D scrolling
Gameplay: Platform
Published by: Sun Corporation of America
Developed by: Sun Electronics Corp.
Released: 1992
Platforms: SEGA Genesis / Mega Drive, Game Boy (GB), Nintendo (NES)
This game has been featured on NES, SNES, and Sega. And everywhere it is exactly the same. Even somehow strange. The game itself is pretty good. Batman uses different types of weapons that are knocked out of the boxes during the game. By holding down the fire button, you can enhance the volleys, and by gaining enough special energy, Batman becomes invulnerable for a while. Of course, there will be bosses.
‹
›
Home
View web version