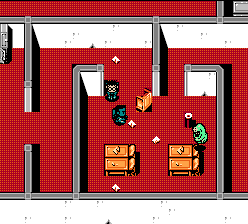 Genre: Action
Perspective: Top-down
Published by: HAL Laboratory
Developed by: HAL Laboratory
Released: 1990
Platform: Nintendo (NES)
One could worry about the lack of normal games for "Ghostbusters" on NES, if Hal Laboratory, which released the eponymous game on Game Boy, did not make her and our beloved console happy. We play with a view from above. In the beginning we choose two hunters: one is our character; The other is auxiliary, it is controlled by a computer. We catch ghosts, tirelessly striking them with a ray, and wait until the helper approaches and entangles them. The graphics in the game are good, the design levels are just excellent. An interesting and entertaining game, which should be the ideal "busters".

In the game itself, the choice can be made of five characters (they are absolutely identical in terms of playing qualities). The fifth hunter can become the secretary of the firm Luis, in the film playing a more modest role.
Note that the paralyzing beam will be the weapon of the first of the selected characters, and the second one, controlled by the computer, will be a trap.
Encounter with ghosts badly affects the health of the first of the hunters (the fortieth will be fatal, but there will be two more attempts in the reserve) and at the same time it is completely harmless for the second one.
The trap works only when the ghost caught by the ray glows red.
Red monsters evaporate simply as a result of good roasting by a paralyzing beam, without any hunter intervention with the trap.
The two chosen heroes go to rescue Jane, her child and New York from the clutches of Vigo and his servants. The first character chosen is the master (joystick control), and at his disposal the paralyzing beam (button B). The second, guided character, drags a trap with him, is controlled by a computer and in his actions is quite autonomous. The trap is triggered when button A is pressed, but only during the paralysis beam action (button B pressed). In this case, the beam itself only works for about five seconds, so it is necessary to act as quickly as possible.
For good Americans, legality is above all, and therefore the noble mission of hunters begins with the court building, where two brother-recidivists, long deceased, but still restless, interfere with the administration of justice. Passing through the rooms of the court and clearing them from the metered small spirits (the direction of the movement is shown by flashing white arrows), the hunters get to the meeting room, where they directly encounter brothers-thieves. Here we must bear in mind that the trap will work only when the ghost caught by the ray turns red (apparently, out of shame for what was done). The same thing happens at the end of the penultimate stage of the game, during the battle with the enchanted Zhano, which, however, also multiplies by division. Two more exceptions to the rules arise in a collision with fire-breathing monsters from the red mud at the end of the journey through the underground labyrinths, filled with this rubbish, and when meeting with Vigo at the very end of the game. Red monsters evaporate simply as a result of a good roasting paralyzing beam, without any intervention of the hunter with the trap. Vigo is a much stronger guy than monsters, but the recipe described is good for him. Only to fry it properly should be several times. All other barrels are eliminated in the traditional way, with the help of a ray and a trap.
Of course, for all real ghost hunters, the game will be a good entertainment. It does not require a convulsive throwing from corner to corner and constantly holding a finger on the shooting button. Good graphics are accompanied by pleasant and diverse music. True, some fatigue can cause a rather monotonous operation to clean up the incredibly prolific ghosts of a huge block house - room by room, floor by floor. But, really, efforts are worth it - evil should not go unpunished.
‹
›
Home
View web version