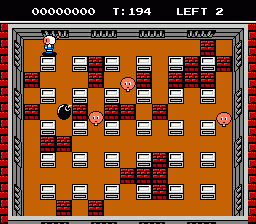 Genre: Action
Perspective: Top-down
Visual: Fixed / Flip-screen
Gameplay: Arcade
Art: Anime / Manga
Setting: Sci-Fi / Futuristic
Interface: Direct Control
Published by: Hudson Soft USA
Developed by: Hudson Soft Company
Released: 1992
Platform: Nintendo (NES)
Bomberman II (in Europe known as "Dynablaster") is a direct continuation of the first part of the game known to all. What are the differences and similarities of the two parts?The main differences in the graphic plan: the backgrounds, the colors of the game have changed. There were new enemies, prizes, the ability to choose the game mode. They are now 3: playing alone, playing against each other or fighting alone to survive against two rivals.Music has undergone significant changes, but the main theme remains the same. Only her arrangement has changed, which, by the way, is very much nothing. In addition to music similarities can be found in many respects: enemies, prizes, all the same bricks, the structure of levels, the same goal of the game, but everything is now presented somewhat in a different light (the graphical transformation of the game affected). Well, and most importantly - the game has become even more interesting!Although the second part came out much later than the first, it does not look so much better that you could play it with full immersion. Approximately the same was the opinion and the majority of players around the world at the time of the announcement of the game. As a result - with all its (let's say directly, not fundamental) innovations, the second part did not achieve the same popularity as the original.Can you advise her to walkthrough? Sure, yes. Only more for those players who are not familiar with the first part of the game.