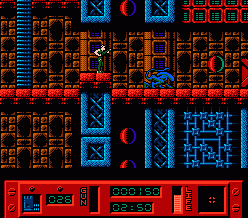 Genre: Action
Perspective: Side view
Visual: 2D scrolling
Gameplay: Platform
Setting: Sci-Fi / Futuristic
Published by: LJN
Developed by: Probe Software Ltd.
Released: 1993
Platforms: Nintendo (NES), SEGA Game Gear, SEGA Genesis / Mega Drive, Super Nintendo (SNES), SEGA Master System, Amiga
Sci-Fi movie (among them - Alien 3) for a long time and it is conclusively proven that in the vast universe we are not alone. Numerous forms of life thrive on their own, different from ours, laws, and some on the Borrow mind set is not as brothers. And the planet is inhabited by Fury-161 creatures, alien earthlings in all respects other people's ...
The continuous battle with the aliens is Lieutenant Ripley in this cool action movie. The challenges facing a brave woman, complicated by the fact that the victory should be achieved in a strictly allotted time.
8 missions of suicide.
Fury-161 is a grand space prison. Alien monsters, alien, making their way to the dungeons where prisoners re, and by continuing to bombard the main character, Lt. Ripley, begin to enter the prisoners in cocoons. It turned out to be downright paradise for these vile creatures - and plenty of people have nowhere to escape. In general, the ideal conditions for the murderous larvae. Here it is reluctant to instantly re, but only to see, to live an honest man will not have to ... That's unfortunate victims hanging in the arms of the powerful tentacles and find the last minutes before death. Hurry!
The game consists of eight stages of the mysterious underground labyrinths, each of which roam adult strangers, guarding their larvae and four or more inmates. While wandering in the prison you have to climb stairs (the joystick up or down). open and close the door (joystick Up in the remote door control), jump on the floors (button B), and cracking down on monsters (button A or Turbo A). On the scoreboard in the bottom of the screen you can see information about Lieutenant Ripley and its equipment. Consider it from left to right and examine the methodology for the use of weapons.

At the beginning of visible square with the symbol in the hands of our heroine weapons. To change it at any time SELECT button, and another at Ripley in addition to the beloved automatic rifle has grenade launcher, hand grenades, and a short-range flamethrower. When the lieutenant moved the ladder, it is, regardless of the selected weapon, uses exclusively grenades, throwing them down on the heads of strangers.
Immediately after the square, the rectangle is visible at your disposal ammunition. If he runs out, without losing any time switch to any other weapon.
Follow this scale applies only to carabiner. If you continuously press A or Turbo A barrel will start gradually become hot, and after a while continuous turn choke - need time to cool down the overheated mechanism.
Right in the middle panels, one above the other, are two rectangles. The top points scored are counted, a lower alternate remaining in your possession time and date have not yet released prisoners. While in the maze is at least one prisoner, the output to the next stage is closed.
Further vertical column shows vitality Ripley. This stock is gradually reduced when the lieutenant is broken, falling down from a great height, or falls under ambulance paw or accurate spit of others.
And the last, the most right square represents the screen display, exhibiting a any living thing near you. This is a very useful thing, but at every stage you have to re-look the batteries for it (oblong white box), and time is running out ...

The first stage - 4 prisoner, the second stage - 5 prisoners. The first two stages Ripley begins on the surface of the planet. At the beginning of each stage, while Ripley is flashing, it is immortal. Therefore, the second step on the road to the left stairs, you can easily run through the racing meet someone else with no health effects.
After the second stage is a meeting with the first boss. It's easy to kill, standing against the wall if you do not forget that Ripley is able to shoot not only from automatic rifle. Throughout the game, the output of the next stage is opened as soon as you save the last prisoner, and the output of the next boss room opens simultaneously with the death of your opponent.
Third stage - 5 prisoners. After the liberation of a prisoner number 1, it is advisable to jump into the failure to reach a prisoner and number 2 on the elevator. Of course, for that jump you have to pay vitality, but to really start to feel a lack of energy only on the last two stages, and here is the main enemy of Ripley - time, especially when breaking the fourth prisoner, trying to cope simultaneously with a lift and a stranger.
Fourth stage - 5 prisoners. During the fight the second boss have to maneuver to the right of the stairs, which regularly jumps into this monster. When the boss is sitting on the step, it is possible to get out of the carbine. Then the monster jumps right to run and shoot, trying not to run into the spit area. After a while, the boss jump over your head and it will appear under your step (and Ripley falls dramatically unfold), and a little later jumps up, and everything will start again.
Fifth stage - 6 prisoners. From this stage labyrinth ventilation pipe leading to the outputs of the subsequent stages, it is not only complicated, but also long. We have to hurry.
Sixth stage - 7 prisoners. Freeing the prisoner number 1, we must urgently turn around and crawl back through the pipe - there is moving elevator, which quickly takes you to the top.
Third boss - it is necessary to carefully sit down on the ground, located at the right edge of the pit just above floor level. If you got right, boss, jumping over the pit, will not touch any PALAMI Ripley, no spitting, and when you shoot sitting, ammunition and take out the monster on the right and left.
The seventh stage - 4 prisoner. There is only one elevator, but have to mess with it for a long time. If you run fast, Ripley will have time to catch it. And who did not, let him try a suicidal jump, because the elevator has to wait for a long time.
Eighth stage - 5 prisoners. On poslednik two phases have to save not only time, but also the vital energy. Therefore, you should try to spend these reserves equal. After the liberation of a prisoner number 1 need to climb up, run back to the right and held to fall down - other attempts to get to the No. 2 Detention useless, though very attractive.
After the eighth stage will fight with two bosses. The first walks on the top floor of the room. Maneuver around the threshold (where the floor level to the left a little bit above the floor right), not being afraid sometimes fall under the monster clawed paws. The second boss wanders through the ground floor, it is best to destroy, standing on the left site of the transporter and grenade throwing off right and left. When the monster jumps to the left, he could lose his back Ripley. If you want to save vital energy, bounce to the beat with the opponent. And remember that when the energy at the end of your clumsy jumps and clawed paws boss threatened with destruction on the verge of victory. To the output to jump to the right platform above the conveyor.