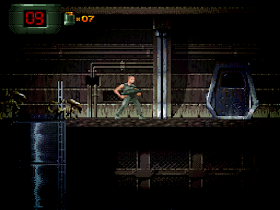 Genre: Action
Perspective: Side view
Visual: 2D scrolling
Gameplay: Platform, Puzzle elements
Setting: Sci-Fi / Futuristic
Narrative: Horror
Published by: LJN
Developed by: Probe Software Ltd, Spearsoft
Released: 1993
Platforms: Super Nintendo (SNES), SEGA Game Gear, SEGA Genesis / Mega Drive, Nintendo (NES), SEGA Master System, Amiga
Made by the same Probe and published by the same LJN as the aforementioned gaming family, the SNES version of "Alien 3", however, has some significant differences that allow it to be set apart.That is, at first it seems that there is the same thing here: bald Ripley, armed with the same machine gun, flamethrower and grenade launcher, runs around the catacombs of the prison and rescues prisoners. But here the computer terminal standing at the level begins to issue other tasks. Ripley, in addition to rescue operations, will have to weld doors, look for spare parts for some units, destroy xenomorphic eggs and do a lot more. In eachLevel, you need to complete six missions, and all levels are five, but they are giant branching labyrinths. So be prepared that the passage will take more time than the familiar Alien 3 on NES.Prison literally teems with aliens - their thousands, they are of all kinds, they twig from everywhere, not allowing to take a breath. From the ceilings acid drips, which is not so easy to notice. Health, however, Ripley's heroic, and quickly kill someone else's can not. But life is only one! Yes, this is a very difficult game.Visually, she initially is not impressive - some monotonous gloomy gray, an indistinct xenomorph, a pale Ripley, unconvincing flamethrower flashes. But here we get to the lair of strangers, and here everything is different.The fog is bubbling, beautiful and terrible biomechanical constructions are all around. And then - again endlessly monotonous and rather tastelessly depicted prison casemates.