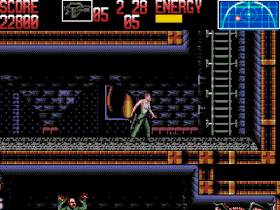 Genre: Action
Perspective: Side view
Visual: 2D scrolling
Gameplay: Platform, Puzzle elements
Setting: Sci-fi / futuristic
Narrative: Horror
Published by: Virgin Games
Developed by: Probe Software Ltd., Eden Entertainment Software Ltd.
Released: 1992
Platforms: Amiga, SEGA Genesis / Mega Drive, SEGA Game Gear, Super Nintendo (SNES), Nintendo (NES), SEGA Master System
Platformer, the plot of which is based on the film of the same name ("Aliens 3"). Helen Ripley, the protagonist of the "epopee", for which we have to play, has to wake up ahead of schedule from cryogenic sleep, because the spaceship "Sulaco", on which, among other passengers, there were Alien embryos, crashed on the planet-prison colony " Fiorina 161", inhabited exclusively by defenseless prisoners, who are easy prey for the monsters who have escaped to freedom (and by no means only in terms of food!...
The gameplay is not much different from thousands of other platformers: we run, jump, go down and up stairs, and also shoot Aliens suddenly crawling out from under the floor, from corners and other places. They do not have much health, but upon physical contact, they instantly throw Helen to the ground, which takes quite a lot of life.
However, simply destroying monsters is not the only or even the main goal of the game. To pass the level, it is necessary to save all the prisoners on it before the Aliens get to them.
Graphically, the game looks different on different platforms, but none of the versions is without a certain charm. The most beautiful in terms of clarity of drawing, in my opinion, are the versions for Amiga and Sega Genesis. In addition, an interesting point is the fact that the design and structure of the levels in almost every version are different, and in the version for Genesis they are the most difficult - true labyrinths.
The verdict is an interesting game, almost any version of which runs perfectly with the help of emulators. But on the PC, we never saw a single platformer dedicated to the world of Aliens...
‹
›
Home
View web version