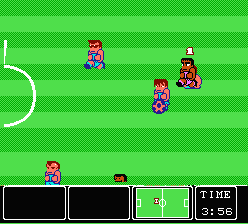 Genre: Sports
Perspective: Bird's-eye view
Visual: 2D scrolling
Gameplay: Arcade
Sport: Football (European) / Soccer
Published by: Nintendo of America Inc.
Developed by: Technos Japan Corp.
Released: 1990
Platform: Nintendo (NES)
In general, the game follows the rules of the real game of football, but with several significant differences. Each team has only six players. (Goalkeeper, two defenders, a midfielder and two strikers). The offside rule does not exist, the game is against the rules is not penalized, which makes use of physical force most effective way of screening the ball from an opponent.
There are two game modes:
Championship mode, where one or two players command one of 13 available teams and try to defeat the computer opponent.
Confrontation mode that allows you to play two teams in a variety of field types with customizable weather. The game can participate up to four players (only possible when using the NES Four Score or NES Satellite).
In the game there are a large number of configurable (confrontation mode) and non-configurable (championship mode) options. Starting with the weather, which may not allow you to play (for example, if you flood water field and arrange a thunderstorm with frequent lightning, then both teams all the time will be out of action lightning strike) to the individual characteristics of players on the team (strength, endurance, speed jogging, morals and so on. n.).
Present as well and superudary. The Japanese team, unlike other teams, each team member this type of attack is different and varies from simple discoloring and deformation of the ball in motion with acceleration and ending with its complete conversion to other physical objects (eg animals), and the flight of a completely unimaginable paths . When you hit the ball in a state of "superb" in any of the players, except the one who inflicted superudar, the ball takes the player out of action for a long time. Depending on the physical parameters of the player inflicts superudar, and take it for yourself, the ball can either go to a normal state, and slow rebound or continue to move the gate in the same state. In addition, each hit a ball to the player (also applies to goalkeepers), especially superudary reduce its endurance to physical attacks.
Game Tactics reduces clogging the maximum number of goals in the opponents' goal, and progressively improve its ranking in the standings. The final match of the World Cup you will play against Germany. However, apart from competitive part in the gameplay there is inexpressible charm. Someone finds him in constant fights for the ball, someone to find and lure the enemy into a trap formed by natural obstacles, someone in tricking the goalie and bypass protection. Characteristic of the game humor is difficult to convey in words or simply to see, you need to play it.
‹
›
Home
View web version