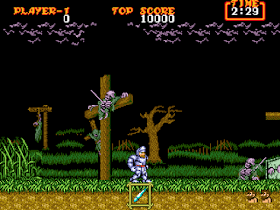 Genre: Action
Perspective: Side view
Visual: 2D scrolling
Art: Anime / Manga
Setting: Medieval
Narrative: Horror
Published by: SEGA of America
Developed by: Capcom Co.
Released: 1989
Platforms: SEGA Genesis / Mega Drive, Arcade Machine, Super Nintendo (SNES), SEGA Master System
Port of the second part of the arcade hit on Sega. The game is transferred qualitatively, the graphics, of course, are inferior to the graphics on arcade machines, but this is inevitable. As in the first game, Knight Arthur rescues his beloved, Princess Prin-Prin, whose soul was captured by Lucifer himself (in this game, due to censorship, he is called Loki). Arthur fights enemies in armor, and when he takes damage, he remains in his shorts. You can also find golden armor, which makes it possible to accumulate energy for an attack. In this game, you can throw weapons not only sideways, but up and down. Traditionally for games in the series, all levels must be completed twice. On the second round, you can get a special weapon, without which they will not be allowed to the main boss.
‹
›
Home
View web version