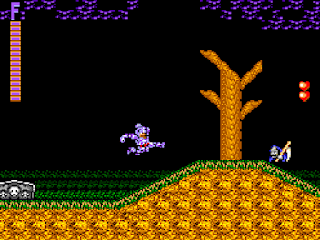 Genre: Action
Perspective: Side view
Visual: 2D scrolling
Art: Anime / manga
Setting: Medieval
Narrative: Horror
Published by: SEGA of America
Developed by: Capcom Co.
Released: 1989
Platforms: SEGA Master System, Arcade Machine, Super Nintendo (SNES), Nintendo (NES), SEGA Genesis / Mega Drive
Those were distant times when knights searched everyone and everywhere in search of the Holy Grail, defended the honor of beautiful girls and fought against evil forces. You are also a knight, and a knight with a daunting task - to infiltrate the Lucifer's palace in order to destroy Great Demon King Lucifer. Cool game, everyone to play it. You have a large arsenal of weapons and magic, but you need to get it and learn how to use it, which I failed. High difficulty!
‹
›
Home
View web version