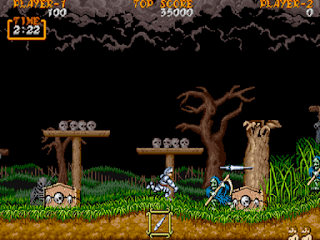 Genre: Action
Perspective: Side view
Visual: 2D scrolling
Art: Anime / manga
Setting: Medieval
Narrative: Horror
Published by: Capcom Co.
Developed by: Capcom Co.
Released: 1988
Platforms: Arcade Machine, Super Nintendo (SNES), SEGA Master System, SEGA Genesis / Mega Drive
A game about a knight in shining armor, a sequel to Ghosts' n Goblins. Three years after the events of the first part, hellish creatures attack the kingdom. Beams from the dark night sky deafen the inhabitants, stealing their souls. The beloved of our hero, the knight Arthur, also falls under the distribution, her soul is kidnapped, and her lifeless body falls to the ground. At the head of all this disgrace is the true king of the demon world, Lucifer, with whom our hero will have to fight. But before that, he will have a long way to different locations, teeming with ghosts, ghouls and other evil spirits. Sometimes you just have to fight huge monsters! Compared to Ghosts' n Goblins, there are more weapons and golden magic armor that allows you to fire a super shot with your current weapon. Also, the hero can now shoot upward, as well as downward in a jump. The graphics have become more cartoonish, colorful, and the atmosphere less creepy and dark. In general, the game has become more varied and interesting, but the difficulty is also quite high.
‹
›
Home
View web version