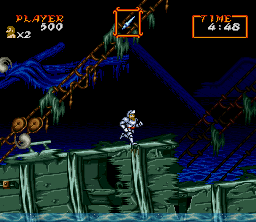 Genre: Action
Perspective: Side view
Gameplay: Arcade, Platform
Setting: Fantasy
Narrative: Horror
Published by: Capcom U.S.A.
Developed by: Capcom Co.
Released: 1991
Platforms: Super Nintendo (SNES), Arcade Machine, SEGA Master System, SEGA Genesis / Mega Drive
Quite recently on our site was very interesting, in my opinion, an article about complex, or as they are called - hardcore games. It was she who prompted me to get the console out of the dusty closet, to connect and to try on my own some games from that composite chart. Hagane, honestly, in terms of passing I do not "poper"; Not that the game would be difficult, but I could not go any further than the second stage. Super Ghouls'n Ghosts also seemed damn difficult and uncomfortable at first, but for this game I took it seriously, and an hour later it was already quite far advanced. The baggage of emotions and sensations in the end resulted in this material, because the game, in addition to complexity, really has much to boast about, which I hasten to tell you.

We begin, as is customary, from the plot of the game and move to the times of castles, dragons, beautiful princesses and brave knights. It is the latter, as it is easy to guess, and is the main character, going in search of his bride. Returning from training, or maybe from another crusade, Arthur - that's the name of our knight - he immediately runs to a rendezvous with his passion, but here's a failure, the demon grabs the lady right from Arthur's hands. Almost a mirror story was in the predecessor, released by Capcom for the 8-bit NES console. The game was called Ghosts'n Goblins and was also considered one of the hardest on the console. We'll come back to Arthur's series, it's time to save the princess - adventures begin.

Beginning of the game

From the first frames of this side-scroller, all the "delights" of the game, or rather the traps and monsters invented by Capcom, come crashing down on us. The usual line of lives, as in many other games, is not here; The developers showed a restrained sense of humor - our hero has only one right to make a mistake, it is worth touching the enemy, we lose our armor and stay in our underpants, with the repeated successful attack of the enemy or an unsuccessful attempt to take an obstacle, Arthur dies, and immediately climbed to the bone. The game has a lot of different troubles, in addition to the enemy's armada, for example, thin ledges protruding from the water, or a floating flimsy raft, to which it is very difficult to calculate the jump. It adds complexity to the possibility of a second jump, it would seem that this should ease the task, but the trouble is, we are uncontrollable during the flight, and if too sooner or later to press the jump, there will not be a chance to go back. Everything is like in life.

To ensure that the gamer does not despair of despair, the developers gave us a good selection of weapons. This does not mean that by picking it up, it becomes much easier to play and everything can go right away - of course not! But with skillful use, some moments are slightly simplified - as they say, "a skillful hunter will not let an arrow in vain". Let's look at each class of weapons: at the very beginning of the game Arthur flips spears, this is the basic kind of weapons available from the very beginning of the game, other types of arsenal can be picked up from zombies or hidden chests. Speed ​​at the spear is average, damage too; If the target is at a non-standard height, there are problems with the hit. The next type of weapon is an ax: the radius of attack is much larger than that of a spear, the damage is the same, but the speed is slightly inferior. If, after throwing an ax in front of you there is a monster, there may be problems, since until the abandoned ax is stuck, the new one can not be thrown. At the first levels, you can still afford the time for the next throw, but the further Arthur passes through the map, the faster you need to react. The next type of improvised means - tomahawk - comes to the rescue. Tomahawk - an excellent weapon against small concentrations of enemies with a small number of lives. He flies very quickly, you can release up to 3 tomahawks, but, unfortunately, the damage is extremely weak, and against the bosses this weapon is ineffective. The most convenient weapon, according to the author, is a bow with two arrows. Pluses a lot, it's a good speed, it's average damage, but most importantly, it's fire in two directions at once. Wherever the enemy appears, knocking it down will not be a problem, besides the arrows fly to the end of the location and you can release up to 4 arrows on one screen. When there are many opponents, or they are quite large (respectively, and tenacious), there is nothing better than a "Molotov cocktail from the Middle Ages". The product of the genius of the local magician is placed in a small vessel, when throwing into the enemy, leaves behind a flame, which for several seconds causes a powerful damage to the enemy. Works great against terrestrial creatures, but almost completely useless against very mobile jumping enemies. For gourmets, Arthur has sabers, which he throws like a boomerang. Of course, they do not return, but the impression of the throw is exactly that. The special feature of this weapon is that when it touches the surface it strikes several hits on the "iksposobnoy" trajectory, which is quite effective in dealing with slow ground monsters, but it is useless against flying creatures. Well, the last weapon appears near the end of the game, it's the most common medieval sword, however, with an unusual attack. After throwing one or more swords, they, flying a little forward, suddenly sharply soar upward and, having described the square in the air, disappear. I would not advise you to switch to this weapon if you could keep it convenient for you by the end of the game, since the sword has a number of minuses. The main one is enemies, attacking at a distance, just will be out of reach of the sword. Also, a sword at high speed does not have a very high damage, which makes it very ineffective against fighting bosses.

With the words "excellent graphics" now you will not be surprised at all, and if it concerns retro games, so generally the majority will twist at the temple, how can it say that a 16-bit can have a good graphics in comparison with my PS3? But retro gamers will understand what it is, because the Super Ghouls'n Ghosts graphics are really excellent. And it's not about any technical tricks like all sorts of FX chips, and not in the effects that can give the overall impression, everything is much simpler - the game is done with a soul, not in a hurry, and well thought out to the smallest detail. At the beginning of the game we are shown a map of the world, according to which it is already possible to understand how different stages will be. Describe specifically each level I will not, try to look at everything and open it, but I note that the stages use a "chip" to change the landscape. For example, we run through the cemetery, when a small earthquake occurs and the earth leaves from under the feet, or rises high; Or we swim on a sloppy raft, and from time to time we are thrown by waves. There are many such effects and they are present almost in every stage.

As it should be in such games, the end of the stage is guarded by the boss - a certain creature that has a huge health reserve and the desire to erase Arthur to powder, while huge sizes, exceeding our hero, times that way at five. Each boss must be defeated by his own tactics and for everyone there is the most convenient weapon. As I wrote earlier, universal weapons, in my opinion, are arrows. Someone will have to beat for a long time, but life will be intact and the level itself passes later will be easier. Just to speed up the process of killing the boss and passing the stage, the developers introduced a small stimulus in the game in the form of gold and silver armor, which can be found in secret chests. As a rule, these chests appear after passing a difficult obstacle, as if mocking - "you want to take me, come back and walk again." The armor will fall only if you do not reach him as a "nerd", otherwise you just pick up the usual armor, but be prepared, there is a 10% chance to find in the chest an evil magician, which before turning temporarily turns you into an animal. To attack or dodge, by itself, it is impossible and if there is a monster next to you, you will surely lose a life. So what does this super armor give if it's so hard to find and you can still get the spell in the bargain? Silver armor improves weapons, increasing damage and range of attack, adding additional weapons to the weapon. Onions are the third homing arrow, for example, the spear has additional rays, the ax has speed and radius, and so on. Gold armor can be found in the same chests, while you should shine silver. He does not add anything to the main weapon, but when you press the strike button, he causes a super blow. Calling such a blow requires about 5 seconds to recover energy and is very useful against bosses. It is recommended to look for and save such armor, but it is not necessary for passing the condition.

Separately, I want to speak about music in the game - in my opinion it is simply excellent. Each stage has its own style and its own sound track, which can change after passing through half of the stage. The rapid pace of the level in the cemetery, where the blood boils in the veins, is gradually replaced by calm and depressing samples of the level on the water. The success of the game is largely due to the composer who invented all the tracks.End of the gameWiping his fingers to the calluses and killing a bunch of monsters, we finally reach almost to the very end of the game. And then we are waiting for another surprise from the developers, it turns out to get to the last location and save the princess, we need an amulet hidden in the castle. As it is easy to guess, the game starts from the very beginning, plus the level of complexity increases. Enemies become almost twice as many, they become more tenacious and more dangerous, bosses, for example, begin to attack in a different way. One consoles, continue still you can earn for points.

To appreciate all the delights of the game, you need to be patient. Super Ghouls'n Ghosts - not a game for an hour, most likely you will spend about 4-5 hours on the first pass and the same on the second, provided a high skill game. Whether it's worth it or not is up to you. Personally, I was prompted to go through an article about complex games and the passage of "goblins" became a matter of principle.
‹
›
Home
View web version