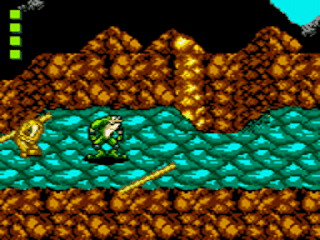 Genre: Action
Perspective: Side view
Visual: 2D scrolling
Gameplay: Beat 'em up / brawler, Platform
Sport: Surfing
Setting: Sci-fi / futuristic
Published by: Tradewest
Developed by: Rare
Released: 1993
Platforms: SEGA Game Gear, Nintendo (NES), SEGA Genesis / Mega Drive, Arcade Machine, Game Boy
The iconic beat 'em up that came to Game Gear after it walked heavily across the TV screens of NES and SEGA Genesis owners. The game practically does not differ from its predecessors: the architecture of the levels is the same, the enemies are the same, the graphics did not suffer very much, except that the screen resolution has decreased, although the sound, as is usually the case on GG, is terrible, the motives themselves are not quite recognizable, but how they beep to listen not easy. Yes, by the way, there are more enemies in the game, however, it became much easier to kill them. In general, the game is good, you will not be bored.
‹
›
Home
View web version