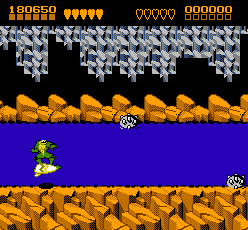 Genre: Action
Perspective: Side view
Visual: 2D scrolling
Gameplay: Beat 'em up, Platform
Setting: Sci-Fi / Futuristic
Sport: Surfing
Published by: Tradewest
Developed by: Rare
Released: 1991
Platforms: Nintendo (NES), SEGA Genesis / Mega Drive, Arcade Machine, Game Boy (GB), SEGA Game Gear (GG)
"Battletoads" is one of the most graphically advanced video games for NES, released when the console market was already ready to move to 16-bit technologies. The game was also widely known for its very high complexity.The plot of the game, written by Guy Miller, was published in the comic book Nintendo Power. Two anthropomorphic toads, Rash and Zitz, must save their friends: the toad of Pimple and Princess Angelique from the Queen of Darkness, the ruling planet Ragnarok. To help them in this will be Professor T. Bird (T. Bird) from his spaceship "Grief".Different levels have very different styles of play, so for the passage it will be necessary to apply different tactics. There are several pseudo-3D and traditional 2D "bit-em-up" levels in which the player advances, destroying enemies, but even at these levels, as a rule, there are many deadly obstacles. The most difficult are races at levels where the character must overcome a number of obstacles in flight at high speed, or be ahead of the opponent, who can instantly kill the player. These levels, as a rule, require the player to remember the sequence of obstacles on the way and an extremely fast reaction. Other levels include climbing and jumping: the "serpentine labyrinth", an underwater level with deadly rubber ducks and dangerous monsters, as well as two challenging climbs up, including the final climb to the Queen's Tower of Darkness.The game is distinguished by unusual ways of destroying enemies. Due to the acquired mutations, the fighting frogs have the ability to transform their body, so they can cause more serious damage to the enemy in hand-to-hand combat:
The game Battletoads was a real hit, and so was released a few sequels in the following years:
So, we summarize. The game "Battletoads" is simply phenomenal in all aspects, whether it be graphics, music or gameplay. In 2005, the version of the game for NES hit the 98th position of the list of 100 best games of all time according to the IGN website version. Be sure to play this true masterpiece!
‹
›
Home
View web version