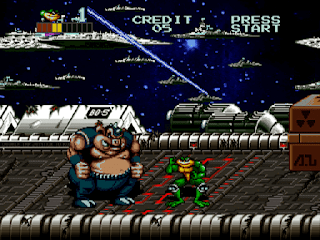 The plot of the arcade Battletoads tells that the Dark Queen has once again decided to destroy the brave spotted green guys and enslave the world. And this time her most important henchman, Robo-Manus, became her inspiration for these exploits. He and his no less disgusting accomplices, General Slaughter, Karnath, Big Blag and other famous and unknown villains took up the practical implementation of a brilliant plan to conquer the universe, in the first paragraph of which the destruction of the brave toads. One way or another, our mottled green comrades will have to give them the first number again.
‹
›
Home
View web version