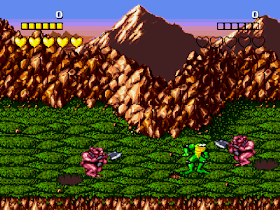 Genre: Action
Perspective: Side view
Visual: 2D scrolling
Gameplay: Beat 'em up, Platform
Setting: Sci-Fi / Futuristic
Sport: Surfing
Published by: Tradewest
Developed by: Rare
Released: 1993
Platforms: SEGA Genesis / Mega Drive, Nintendo (NES), Arcade Machine, Game Boy, SEGA Game Gear
Before you play Battletoads for Sega's console, which has become very popular and iconic for its genre. Also among fans of 16-bit games, it has the glory of a very difficult and almost impassable.The plot line is not a strong side of the game in the sense that it is not something original, but, nevertheless, it is present here. In accordance with it, a certain Queen of Darkness, with the help of her numerous army, kidnapped one of the members of the team of battle frogs and even took a princess, a friend of our heroes, into the bargain. Naturally, this caused a storm of reimbursement in their camp and the two remaining amphibians go on an intergalactic journey in search of the evil queen.It is worth noting that the graphics here look very worthy - an order of magnitude higher than other famous representatives of the genre "beat-em-up". Although, of course, it is obvious that the hardware capabilities of the Sega Mega Drive 2 (Genesis) were not fully used. Part of the reason for this was the long duration of the game - the presence of many very long levels.For many, she did not submit, and only a few persistent gamers could defeat the last boss and contemplate the final victorious scene.

When playing together, try not to be on the same horizontal line during a fight - you can accidentally knock a friend.
Pick up the pieces of defeated mechanical opponents - they can be used as weapons.
On sections of vertical descents, having rendered harmless to the crow, try to catch the departed beak - an excellent weapon.
Go to the third level. At the beginning of the game, when two enemy pigs appear, hit with a head run (forward + forward + B) first swine to the left, then to the right and without the slightest delay rush with acceleration to the right. You will see a shimmering star - this is the secret portal.
In order to get from the third stage immediately to the fifth, during the fifth race, hit the tenth of the account wall.
‹
›
Home
View web version