Spider-Man Vs. the Kingpin (Master System) 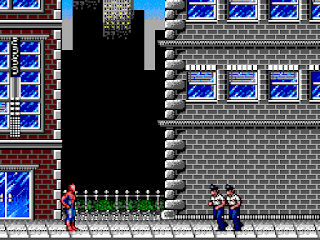 Genre: Action
Perspective: Side view
Visual: 2D scrolling
Gameplay: Platform
Published by: SEGA of America
Developed by: SEGA of America
Released: 1990
Platforms: SEGA Master System, SEGA Genesis / Mega Drive, SEGA CD / Mega-CD
The 8-bit Sega Master System version of the game was notable for being one of the last games released for this console in America. It had the same storyline as the 16-bit version, with slightly tweaked levels and cutscenes (one of which included a Doctor Strange cameo). But even at the easiest difficulty level, the game was difficult to complete. Mary Jane Watson was not kidnapped in this version of the game, but she can appear in the ending if the player successfully completes the game.
‹
›
Home
View web version