Spider-Man vs. The Kingpin (SEGA-CD) 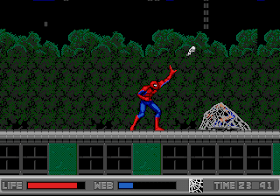 Genre: Action
Perspective: Side view
Visual: 2D scrolling
Gameplay: Platform
Published by: SEGA of America
Developed by: SEGA of America
Released: 1993
Platforms: SEGA CD / Mega-CD, SEGA Genesis / Mega Drive, SEGA Master System (MS)
Unlike the Spider-Man vs. The Kingpin for the SEGA Genesis / Mega Drive has made some gameplay improvements. There are two new levels of Mysterio's Funhouse and Vulture. Spider-Man has new tricks, but the ability to take photos to make money has been removed. Also, the special charm of the game for the SEGA Mega CD is the animated video clips. The plot of the game tells us that Kingpin decides to frame Spider-Man and announces that, they say, he planted a bomb in the city, having appointed a good reward for his head. Now Peter Parker in the guise of Spider-Man is hunted by the whole city, including the police. In order to defuse the bomb, you have to find the keys to defuse the bomb. To do this, you will have to fight with many super villains. On top of all this, Mary Jane Watson will be kidnapped. And before you fight Kingpin, you have to fight Bullseye and Typhoid Mary. There are also alternative endings depending on your actions.