Spider-Man Vs. the Kingpin (SEGA) 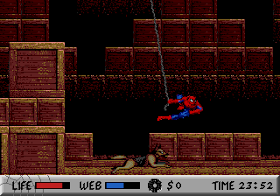 Genre: Action
Perspective: Side view
Visual: 2D scrolling
Gameplay: Platform
Published by: SEGA of America
Developed by: Technopop
Released: 1991
Platforms: SEGA Genesis / Mega Drive, SEGA CD / Mega-CD, SEGA Master System
In all versions of the game, the player gets the role of Spider-Man, who fights against various supervillains (Doctor Octopus, Sandman, Lizard, Hobgoblin, Vulture, Mysterio, Calypso, Electro and Venom) to obtain the necessary keys to neutralize the atomic bomb, which must Explode after 24 hours. In the middle of the game, Venom is kidnapped by Mary Jane Watson.
The version of the game for Sega Genesis was released in 1991 and became very popular not only for amateur comics, but also for ordinary players. Critics noted that the game has excellent graphics, sound and that the most important thing in the game is the ability to photograph enemies, then to sell photos of the Daily Bugle and to earn more days on the earned day. The game initially had four levels of difficulty. The heaviest was called ultra-hard nightmare mode, in which at the end of each level was first a battle with Venom, and only then with the boss.
According to developer Randal B. Reiss, this version of the game was a great commercial success. Two-thirds of all owners of Mega Drive after passing the game, urged Marvel Comics to continue to renew the license for the rights of Sega characters.
‹
›
Home
View web version