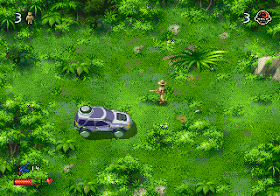 Genre: Action
Perspective: Top-down
Visual: 2D scrolling
Gameplay: Shooter
Published by: SEGA of America
Developed by: Appaloosa Interactive Corporation
Released: 1997
Platforms: SEGA Genesis / Mega Drive, SEGA Saturn, PlayStation (PSX, PS1)
The game is an action with a view from above - "from a bird's eye view", it is dynamic, interesting plot and beautiful graphics. The game is conceived based on Steven Spielberg's film "Jurassic Park: The Lost World", and although the plots of the film and the game are markedly different, the main leitmotif - the adventure of a hunter on an island full of dinosaurs - is preserved. The plot of The Lost World: Jurassic Park begins with the fact that the protagonist is planted on the island of "Sorn", which is home to a lot of dinosaurs, as well as the poacher hunters.
The island of Sorn is divided into four locations, each of which contains three missions. Each time the player receives a certain task, which must be performed. Help is given to a PDA with a navigator, various weapons, as well as the ability to drive vehicles (jeep and boat). At the end of all three missions in the location, the "boss-mission" opens, which unlike the three main ones, is a pseudo-3D shooter with impressive graphics for its time, fully revealing the potential of Sega Genesis.
In The Lost World: Jurassic Park provides a mode of "Civil War", in which two players play against each other. "Civil War" is activated only after the complete passage of the game.
Also, after a complete passage, the player is informed of the MAGICBOX cheat code, which allows choosing the mission from which to start the game.

Troodon is a dinosaur of medium size, gray color. Quite a strong opponent, able to move quickly and often attacks the group. It occurs mainly in open spaces.
Dilofosaurus is a small dinosaur of orange coloration. Is able to spit the poison in the player. The least dangerous opponent.
Raptor is an aggressive dinosaur of medium size, also of orange color. Is the main opponent in the game. Quickly moves, inflicts heavy damage on attack. Mostly inhabits caves and dungeons.
Stegosaurus is a large herbivorous dinosaur with plates on its back. Do not attack if it is not provoked. The game has a mission where several stegosaurs need to be deliberately teased in order to lure them into special cells for transportation.
Triceratops is a large dinosaur with horns on the head. Behaves like a stegosaurus.
Tyrannosaurus is the largest and most dangerous enemy. Occurs only occasionally, mostly in boss missions.