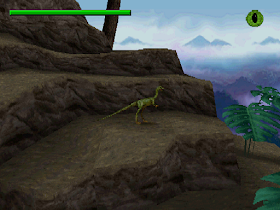 Genre: Action
Perspective: 1st-person, Side view
Setting: Sci-Fi / Futuristic
Published by: Electronic Arts
Developed by: DreamWorks Interactive L.L.C.
Released: 1997
Platforms: PlayStation (PSX, PS1), SEGA Saturn
In Lost World: Jurassic Park, the player is offered a choice of five characters, including the Raptor dinosaur and the much larger and more aggressive Tyrannosaurus. People in the game is a scientist, completely helpless in front of huge dinosaurs, but having a lot of adaptations and also much more intelligent. Each of the heroes, of course, has his own goals: a Tyrannosaur is, for example, the destruction of any humanoid on a huge island. Giant growth, powerful thick skin-armor and monstrous bloodthirstiness will help him to achieve this goal as soon as possible. Other characters, of course, do not have such advantages, but, for example, Raptor can easily make long jumps, and thanks to not too little weight, he has the ability to jump right on the heads of unfortunate people.
Having made a variety in the actual gameplay, the developers did not stop and went further along the path of improving the too stagnant genre. The environment is also an important factor in the game. The whole space is carefully drawn, and standard backgrounds or standard sets of objects are not used, simply drawn once and then put into different scenes. Here, each picture - the very individuality. Each mound, hill, tree, maybe even a blade of grass are part of the artist's plan and are not found anywhere else in the game in the same combination and in the same form. The authors of the game managed to achieve extraordinary realism of the image, while leaving it bright and colorful, just like the one that came off the screen. Especially for the game, several dozen artists created a good ten thousand frames of character animation and their surrounding space. Dinosaurs are allowed to frolic, balancing on narrow rocks and in dark caves, even sometimes under water, where a sufficiently powerful game engine is complemented by the effects of fog and translucency.
However, with all its graphic magnificence, the game is still not far from its predecessors in terms of the gaming aspects themselves. In principle, all this has been and has been many times. It is necessary to jump a lot between the abysses, defeat many enemies, the number of which reaches two dozen, and perform other similar actions. The only "dilution" to this fairly standard set of functions is the ability to use the features of your characters. For example, a Tyrannosaurus is by nature a destroyer, it can destroy or move almost any object, but it is inactive and therefore not able to jump. The professor, in spite of his not very good physical form, which does not allow him to jump five to ten meters in length, can nevertheless move across the chasm with the help of a rope hooked on some tree.
Another interesting point in the game is the principle of creating artificial intelligence that modulates the behavior of all enemies. They move freely throughout the level, even when they are out of your sight, they can sometimes gather in whole herds, or they can immediately start a war for survival. Also, some incidents that will occur without your direct involvement are not excluded: for example, dinosaurs may not share something, and then a fight will start, from which, of course, only one will emerge victorious - respectively, fewer opponents. Dinosaurs are subject to emotions, but they are not very good yet.