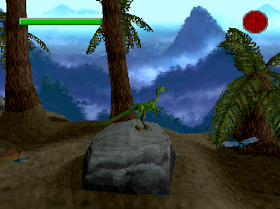 Genre: Action
Perspective: 1st-person, Side view
Setting: Sci-Fi / Futuristic
Published by: SEGA of America
Developed by: DreamWorks Interactive L.L.C.
Released: 1997
Platforms: SEGA Saturn, PlayStation (PSX, PS1), SEGA Genesis / Mega Drive
Despite the fact that 3D games were becoming more and more popular at that time, DreamWorks decided to make the game a 2D Action-platform game with 3D heroes and partly 3D environments. This was due to both the features of the gameplay, as well as easier technical implementation of a 2D game. The action of the game, as in the book, and in the film takes place on the island of Sorn - adjacent to the island of Nublar, where the events of the first part of the book and the movie took place. After the collapse of the park and research center dinosaurs, contrary to the expectations of scientists, did not become extinct, but adapted to the wild nature. All in the game there are 20 different types of dinosaurs.
In total The Lost World: Jurassic Park consists of 30 levels, united in five groups by protagonist. So, the player will manage the first 9 stages of a composer, the next 6 - hunter Jay Hammont, then 6 levels to complete as a velociraptor, 7 more - a tyrannosaurus and the last 3 - Sarah Harding - the last person to escape from the deadly islands. Depending on who the player controls, both the gameplay and the control of the main character are different. For example, the hunter and Sarah Harding are armed with a whole arsenal of small arms, the smallest kompsugnat is at the same time the most dexterous, the cyclotone must constantly hunt to maintain strength, and the tyrannosaurus is the most clumsy and slowest of all . In addition, dinosaurs can restore health by eating their victims, and for this it is necessary for people to search for first-aid kits hidden in game locations.
The goal of each level is to complete it from beginning to end. These are mainly terrestrial levels that pass through the jungle of the island or abandoned buildings, but there are also underwater levels. Some of the stages consist entirely of battles with the boss - especially a strong opponent. In addition to first-aid kits throughout the game, you can find other bonus items — game life, a tooth that makes the dinosaur stronger, or a DNA image. The latter, being fully assembled, allow the past game to see a secret video.
‹
›
Home
View web version