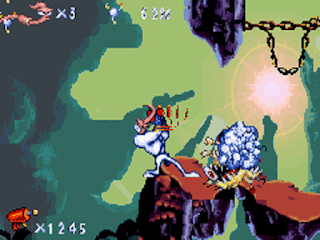 Genre: Action
Perspective: Side view
Visual: 2D scrolling
Gameplay: Platform, Shooter
Narrative: Comedy
Published by: Majesco Sales
Developed by: Shiny Entertainment
Released: 2001
Platforms: Game Boy Advance (GBA), SEGA Genesis / Mega Drive, SEGA Game Gear, Super Nintendo (SNES), SEGA CD / Mega-CD, DOS
The famous game about Worm Jim won the hearts of gamers back at SEGA, now it has appeared on the GBA. The game turned out pretty good, of course it is inferior in quality to SEGA Genesis, but this does not mean that the game is bad. Quite the opposite, the game becomes even more fun, you have to go through all the events of the past, and therefore the second to plunge into the atmosphere of the game ... You will have a pleasant time passing various levels with a huge number of monsters, and enjoying the humor that this game is endowed with. So I advise everyone to play.
‹
›
Home
View web version