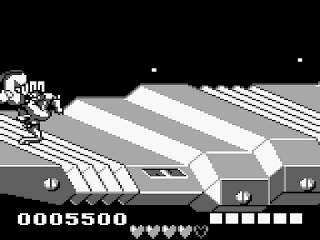 Genre: Action
Perspective: Side view
Visual: 2D scrolling
Gameplay: Arcade, Beat 'em up, Platform
Setting: Sci-fi / futuristic
Published by: Tradewest
Developed by: Rare Limited
Released: 1993
Platforms: Game Boy (GB), SEGA Genesis / Mega Drive, Super Nintendo (SNES), Nintendo (NES)
The Game Boy version does not have a two-player mode.
Players can play five characters: battle toads Rush, Zitz and Pimple (from Battletoads) and "dragons" Billy and Jimmy Lee (from Double Dragon). Toads move faster, but "dragons" have a stronger jump kick. They also interact with objects in different ways.
The game consists of seven levels, each of which is subdivided into several parts. The first, second, sixth and seventh levels use pseudo-3D graphics, the player can move along two axes and jump. The third and fifth levels use 2D graphics. The fourth level is a space side scrolling shooter with controls reminiscent of the Asteroids game. In the third part of the second level, there is also flying on hovercycles. There is a boss at the end of each level.

The space cruiser (Ratship) was sent by the Dark Queen towards the earth, clearly not with good intentions, in order to take revenge for her previous defeat on the planet Ragnarok (the scene of the first part of the game). On the way, he blew up the moon, thereby indicating his presence.
The team of "battle toads" decides to unite with the "dragons" in order to resist aggression and save the earth. Then they go into space, to intercept the cruiser, by helicopter. Having landed on the tail of a space cruiser, after a series of battles, the heroes get inside the ship, and make their way to the energy compartment, where, not finding a way to stop the ship, they steal combat shuttles, with the help of which they fight in space against other shuttles and the cruiser itself. After receiving a certain amount of damage, the space cruiser is destroyed, however, the team of villains does not die, but rushes further, towards the earth, on a rescue shuttle in the form of a rocket, which our heroes will now have to try to stop.
After a series of battles, and overcoming many dangerous traps, the heroes land on a rocket on the ground, where they have to give the last battle to the Dark Queen and her minions.
‹
›
Home
View web version