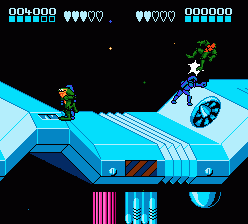 Genre: Action
Perspective: Side view
Visual: 2D scrolling
Gameplay: Beat 'em up, Martial Arts, Platform
Setting: Sci-Fi / Futuristic
Published by: Tradewest
Developed by: Rare
Released: 1993
Platforms: Nintendo (NES), Super Nintendo (SNES), SEGA Genesis / Mega Drive, Game Boy
This project is a fusion of two great games (respectively Battletoads and Double Dragon). The result is an explosive cocktail, which has absorbed the best and worst rule. Here you can select one of five players familiar. Excellent gameplay blows his head. The game is not so nice, how much fun to play. It keeps for a long time beside him any gamer. What did not know how to do the main characters (climb ladders, climb along the cliffs, climb a lattice performances in the walls). During battles, you can use a variety of weapons, which are sufficient. Game speed is a middle ground and gets a gamer like a toy car. The game world is very nicely made, showing the strengths of the NES. Levels are striking in their originality. Player models are made very high quality. In addition to familiar characters, as you can see no less known enemies, who met in the games Battletoads and Double Dragon. In general, the game is bright and exciting. She obviously left a fat trail among the best games for the NES.