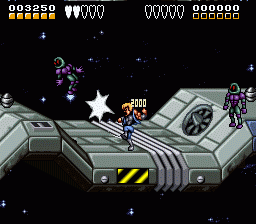 Genre: Action
Perspective: Side view
Visual: 2D scrolling
Gameplay: Beat 'em up / Brawler, Martial Arts, Platform
Setting: Sci-Fi / Futuristic
Published by: Tradewest
Developed by: Rare
Released: 1993
Platforms: Super Nintendo (SNES), Nintendo (NES), SEGA Genesis / Mega Drive, Game Boy
One of the best hits for NES is now available for Super Nintendo. Although the original still remained unsurpassed, this port looks much better version on the Sega Genesis. The graphic component has become much better, and colorful locations will certainly please your visual perception. Look great and the huge sprites of bosses, which in comparison with the images in the version for Dendy look not really menacing. Because of this, the game has become a little more difficult, now it is necessary to select new tactics to the bosses, and even have to juggle them, striking until they have touched the surface. This approach should give a positive result in some cases. Excellent clean musical accompaniment caresses the ears. Also worth noting and the initial splash screen with excellent art of the main characters and bosses. From the game you get new experience and sensations. Recommended for everyone who wants to update their feelings from the passage of the beloved by many and legendary in the history of the game on NES.
‹
›
Home
View web version