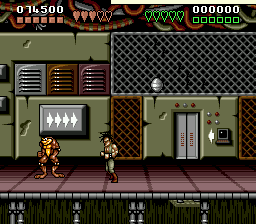 Genre: Action
Perspective: Side view
Visual: 2D scrolling
Gameplay: Beat 'em up / Brawler, Martial Arts, Platform
Setting: Sci-Fi / Futuristic
Published by: Tradewest
Developed by: Rare
Released: 1995
Platforms: SEGA Genesis / Mega Drive, Super Nintendo (SNES), Nintendo (NES), Game Boy
The most powerful insurgent cosmic scale of fighting frogs in collaboration with fellow dragons. One of the best, if not the best game for passing a joint with a friend. The abundance of variety of enemies to savory seaming them to the floor, both literally and figuratively; interactive levels, not only consciously leading you through the story track but also allow interaction with the interior; colorful bosses - all of which will make their contribution to getting you the pleasure of the game and, most important - high replayability.