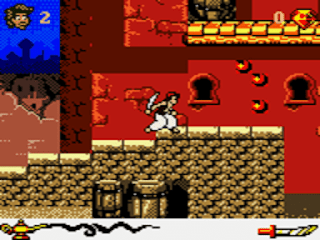 Genre: Action
Perspective: Side view
Visual: 2D scrolling
Gameplay: Platform
Setting: Fantasy, Middle East
Published by: Ubi Soft Entertainment
Developed by: Virgin Interactive Entertainment
Released: 2000
Platforms: Game Boy Color (GBC), SEGA Genesis / Mega Drive, SEGA Master System, Super Nintendo (SNES), DOS, SEGA Game Gear
Aladdin's main forms of offensive against enemy characters are a scimitar for slashing attacks from short range and apples that can be thrown as long range ammo. Apples are a finite resource, but they can be collected in copious amounts throughout the game. Aladdin's health is indicated by a smoke trail emanating from the Genie's lamp in the upper left corner of the screen. The path is shortened every time Aladdin is damaged by an enemy or an environmental hazard. Health can be restored by collecting blue Genie Hearts scattered throughout the levels. If Aladdin runs out of health, he will lose a life. The blue vases within the levels act as checkpoints from which Aladdin will be revived if one had passed before losing a life. Extra lives can be received by collecting golden icons in the shape of Aladdin's head hidden in the levels. If the last life of Aladdin is lost, the game ends prematurely. The number of lives and apples Aladdin is equipped with at the beginning of the game is determined by the difficulty level, which can be adjusted in the main menu. Apart from apples, Aladdin can collect gems, which can be exchanged with a peddler at each level for additional lives and “wishes.” Wishes allow the player to continue the game from the current level after losing their last life rather than having to start over from the beginning. Sometimes "smart bombs" can be found and activated in the form of black lamps, resulting in the elimination of all enemies on the screen.
If the player collects one or more Genie Tokens and passes a level, the player will be taken to the "Bonus Genie Machine", a luck-based minigame in which pressing a button rewards the player with a random prize consisting of a gem , five apples or an extra life. The number of Genie Tokens collected in a level determines the number of rounds that can be played in the minigame. When the player runs out of Genie Tokens or lands on an image of Jafar, the minigame will end. If the player collects an Abu Token in two levels, a bonus level with Aladdin's pet monkey Abu, as the player character, will start tracking the Genie Bonus Machine. In these levels, the player must maneuver Abu from left to right to collect gems, apples and extra lives that fall to the ground while he avoids pots, rocks, palace guards and other dangers. If Abu comes into contact with a hazard, the bonus level ends.
‹
›
Home
View web version