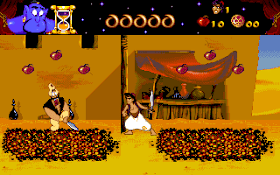 Genre: Action
Perspective: Side view
Visual: 2D scrolling
Gameplay: Platform
Setting: Fantasy, Middle East
Published by: Virgin Interactive Entertainment
Developed by: Virgin Interactive Entertainment
Released: 1994
Platforms: DOS, SEGA Genesis / Mega Drive, SEGA Master System (MS), Super Nintendo (SNES), Game Boy Color (GBC), SEGA Game Gear (GG)
In a distant land once upon a young man, whose house was a street girl, whose house was a palace, and the genie, whose home was a lamp ...
In the palace of the Sultan decided the fate of Princess Jasmine. Sultan told his daughter that she must marry a prince on his birthday. But she did not want to marry unloved. In desperation, the Sultan advised by their supreme vizier Jafar, who in his mind one thing - to get to the Magic Cave, get the lamp, and with it - the power and treasure.
Meanwhile, the princess escaped from the palace to her strange world. It was there, on a bustling marketplace Agrabaha, she met with a poor boy Aladdin and his friend, Abu the monkey. But almost immediately the guards grabbed the boy by the order of vizier. It turns out that Jafar learned that the Magic Cave admitted to myself only one who has a generous heart beats tatters. This man was a young man.
Aladdin and Abu entered the mouth of the tiger god - the magic cave where towering piles of gold and precious stones. Here lay a magic carpet. But at the command of the vizier, they were looking for a magic lamp only in exchange for the promise of freedom and wealth that were needed Aladdin to marry Jasmine.

Adventures of Aladdin in the cave and then a subsequent fraud Jafar led to the young man became the master of the lamp. Jinn rescued him out of the cave, turned to Prince Ali and brought to the palace of the Sultan of ...
Vizier looked for all sorts of ways to get rid of Aladdin-Prince. But it captured the lamp, it had turned out, and not in the right moment - just when the sultan declared Agrabaha residents about choosing a husband daughter of Prince Ali.
Jafar Aladdin banished to the edge of the world. Only true Abu magic carpet ride saved the boy.
Suddenly appeared in front of Jafar, who turned into a slave Jasmine, Aladdin came to him at the last, the most brutal fight. Only the cunning and agility helped the boy cope with a deadly cobra venom and force the genie, which was converted by the Vizier magic lamp.
And the long-awaited victory!
The first thing the Sultan - it changed the law under which the Princess herself could decide for whom to marry. And as Jasmine loved Aladdin, just so she did.
Is not it, a wonderful story!
If you wish to become a member of Aladdin and adventure with him to relive all the vicissitudes of this complicated and unpredictable stories, start the game «Aladdin», released by «Disney Software» and «Virgin Interactive Inter-tainment» in 1994
Brandishing his sword, Aladdin way through the city of Ar-slaves escaped from the prisons of the palace, overcomes fire cave to fight the enemy in the desert, dodging the dangers of a magic carpet ride ....
To do all this, you must cancel own sword, collect and throw apples, climb ropes, and much
more.
Along with Aladdin you will travel on ten game levels:
As with all games, «Aladdin» There are prizes that provide a variety of useful skills that help the hero in his adventures:
APPLE - peculiar kind of ranged weapons. Thanks to them, your character is able to hit enemies at a decent distance. Apples than the bigger the better and safer you will feel intimidated in the labyrinth
game;
HEART GENE - health;
FLUTE - necessary for the emergence of a rope to help you move to the right place;
ALADDIN - extra life;
SYMBOL gin - will enable the machine to get to the prize at the end of the genie level. How many of these characters will be collected, so many times you can try your luck and play with the fate of the game in the artless. Pressing CTRL, you can try to get more jewels, apples, lives and other prizes. In this case, you have to do only good response;
JEWELRY - additional efforts and desire to shop Paddlera. To make a purchase, get in front of the shop to the left or right and press SPACE, and the cursor up. Just do not forget to collect enough treasures in advance. Extra life - five jewels, desire - ten. Suggest the desire to buy, unless of course you do not have just one life left. Desire can be equivalent to six additional lives, and at lethal outcome - continued playing with the level at which it was, and not from the beginning;
SYMBOL OMB - the opportunity to enter a prize round Abu, the monkey which collects jewelry, apples and extra lives to hear and around it. Unfortunately, jugs, stones, swords and other troubles also fly down. If Abu not avoid at least one blow - round ends;
BLACK LIGHT - A bomb that kills all enemies on the screen;
HALF BEETLE - finding the two halves of this golden scarab, you will be able to complete the second level and enter the Magic Cave;
VESSEL genie - helps to keep the achieved position.

A few tips on passing levels

Adventure begins in the dusty streets Agrabaha. Do not forget to pick apples, jewelry, blue heart and other prizes in the widest possible range, and indeed on all other levels. Beware of the enemy who hides in a basket - it takes away your health and even stealing apples. Be careful jumping over hot coals and jumping on the platforms, which are quickly disappearing. Take care of the apples and their own forces to the last guard, guarding the palace.

Before you sand, palm trees and old destroyed by the wind and the time of construction. He ran a little ahead and collecting apples, go back to the beginning of the level and find a surprise - a prize. Most - extra life. Fear of snakes and their deadly bites. Jump over spikes and not fall into the abyss. You have to learn how to jump from a palm tree to palm tree like Tarzan. And most importantly - do not miss the two halves of the beetle, which are gathered, you can finish the level.

Again Agrabah. We'll have plenty of run over, naprygatsya and fly on the ropes with a magic flute. Use ropes for fast movement in inaccessible places. Kill the snake charmer - his players are very dangerous. And if you see a parrot - embed it saber, you are not a member of the SPCA, and its skin is expensive. When you see that you are flying barrels, answer kind of apples. Do not forget to tune, it is useful at the end. And smash the pots, there is often stored valuables.

Not a very fun place, so the sooner you will be selected here, the better. The main thing, just count your jumps. The sliding rocks, thorns, stone blocks and platforms appear and disappear. Beware pesky bats, skeletons, and as always, faithful vizier guards.

You will need all your skill, the ability to wield a sword and speed to destroy dangerous statues, swords overcome four-armed monkey and find a genie lamp. Beware of falling rocks. Remember - in the water hazard. Open the tunnel, blowing another statue.

You fell on hot days. Still, after all under his feet - raskachennoy sea of lava. At the slightest contact with it comes the immediate death. We can say that at this stage the main thing - speed. But if you are too hurry, then ended his life in hellfire. Tempo run should be as uniform. To escape from burning balls, run and do not stop. But before you jump on the first island, be sure to get on him.
Flight on a magic carpet
Follow fingers genie tells you how you can fly around huge blocks, covering the road. Then you should pick up as many prizes. Four apple slices will give you, of course, a whole apple.

It turns out the lamp - the whole world. You'll have to try hard to get out of it. Rolls down the smoke rings that let the genie, jump off from clicking his fingers. Move on endangered hands. Jump to the place, so as not to get caught up in the sticky muck, as the arm falls back to you. Walk on the head to get on the platform and get to the apples.

Here, at first glance, there is complete peace. Here is a rose, a pond with water lilies, which are flamingos. They also help you to cross. Fish, birds, and then the guards - your enemies. Loyal assistant - a flying carpet. Use the rope to get to the top. And do not forget to release Abu. Make it a jump, swinging his sword. After the end of stage you have to fight with the parrot Iago, Jafar another. Attack him, throwing apples and parrot feathers lose.

Jafar's palace is full of different traps - this sizzling floors, swinging balls, and hiding guards. But the main force - this, of course, himself Jafar. Do not try to run away from it, it is better you cover apples. Fire jump puddles. After a while you will see instead of the Vizier healthy cobra. You will need a whole lot of apples. Therefore, we recommend the course of the game poekonomney handle them and, of course, collect more. A blue heart - perhaps the top prize at this stage. After all, this is the last battle!
After winning the Princess offer a place on your magic carpet and Jasmine will reward you with a passionate kiss on the background a little bit sad inscriptions THE END. But when the authors of the game will thank you just for the fact that you spent at the computer so nice evening and a good rest, my heart feel better.
A few more words about managing the game, and you can safely begin an adventure.
‹
›
Home
View web version