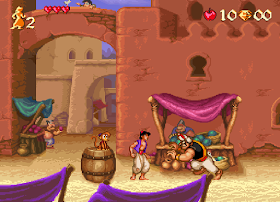 Genre: Action
Perspective: Side view
Visual: 2D scrolling
Gameplay: Platform
Published by: Capcom U.S.A.
Developed by: Capcom Co.
Released: 1993
Platforms: Super Nintendo (SNES), SEGA Master System, SEGA Genesis / Mega Drive, DOS, Game Boy Color (GBC), SEGA Game Gear
The plot of the game closely follows the events of the cartoon: by the will of fate, the street thief Aladdin finds a magic lamp in which the Jinn lives, able to fulfill his three desires. In love with Princess Jasmine Aladdin asks Jeanne to turn him into a prince, and soon seeks the princess's location. However, the insidious vizier Jafar, who wants to sit on the throne of Agraba, is trying to get a lamp.However, the game has its own peculiarities: the game has a level in the Egyptian pyramids and a surreal world in which Ginny is the conductor of the player - this is probably a reference to the scene in the film when the song "Friend Like Me" sounds, she is also Soundtrack level. If a player catches a scarab or collects all 70 diamonds on a level, he will open a bonus sub-level, although this is not necessary to just go through the game.

The player controls Aladdin, who must go through several levels based on the scenes from the film, including the streets and roofs of Agraba. In this, he is hindered by the guard of the Sultan and animals. He can defend himself by throwing apples and jumping on the heads of opponents (unlike the version for Sega Genesis, Aladdin does not have a saber). You can collect precious stones, for every hundred of which the player is rewarded with one life. In addition, in the game for Aladdin everywhere follows his monkey Abu.The health level is displayed in the upper left corner. Initially, the player has a 3 heart - finding hearts on the levels is an opportunity to increase their number.

Battles with the Bosses

Aalso appears the first boss - Street vendor, threatened to cut off Jasmine, disguised as a beggar, hand. The merchant is armed with a sword, and you can beat him by jumping on him five times. In the last part of the game, Aladdin fights with Jafar, who turned from a giant snake. To defeat the villain, you need to jump on his head, starting from two stones, which he alternately spits out. You need to jump on your head six times.