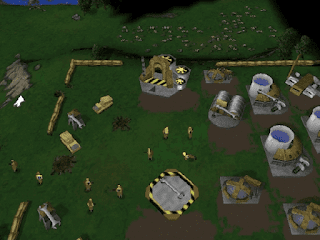 Genre: Strategy / tactics
Perspective: Bird's-eye view
Visual: Free-roaming camera
Pacing: Real-time
Gameplay: Real-time strategy
Interface: Multiple units / characters control, Point and select
Setting: Africa, Europe, Sci-fi / futuristic
Narrative: War
Published by: Nintendo of America Inc.
Developed by: Looking Glass Studios, Inc., Westwood Studios
Released: 1999
Platforms: Nintendo 64 (N64), DOS, PlayStation (PSX, PS1), SEGA Saturn
The first game in the series quickly became incredibly popular and was released on all possible and impossible platforms, but one of the versions is different. If usually the game was simply ported to consoles and consoles simply by slightly changing the controls and various technical details, then for the Nintendo 64 the game was rewritten from scratch with new three-dimensional graphics, missions and, unfortunately, without proprietary FMV.
The general mechanics have not changed - we are still building bases, mining tiberium and churning out troops, only now we can see our troops in detail in all details and even zoom in and out the camera.
The change in graphics somewhat affected the overall atmosphere of the game, and also led to the replacement of some units. So, the classic NOD buggy changed to a buggy based on a passenger car, which is especially noticeable when comparing, African houses began to resemble European ones more, and the infantry became much taller, but all these are trifles that do not affect the overall game mechanics and atmosphere.
‹
›
Home
View web version