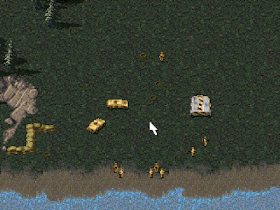 Genre: Strategy / Tactics
Perspective: Top-down
Pacing: Real-Time
Interface: Multiple Units / Characters Control, Point and Select
Setting: Africa, Europe, Sci-Fi / Futuristic
Narrative: War
Published by: Virgin Interactive Entertainment
Developed by: Westwood Studios
Released: 1997
Platforms: PlayStation (PSX, PS1), SEGA Saturn, DOS, Nintendo 64 (N64)
After the huge success of the PC version, this great military strategy came on the PlayStation. You can choose one of the two armies to be commanded, and this choice leads in fact to two different games (the game is located on two CDs). Playing for the Global Defense Initiative (GDI), you will face violent battles in Northern Europe, where the main strategic goal is to protect civilians. At the head of another army - Brotherhood of NOD - you will have to lead a protracted military action in the far east, and so here your dashing guys will have the opportunity, how to turn around. But to achieve success in the game, the ability to simply conduct military operations is not enough.
First, we need to conduct military construction. You must rebuild and equip your base and headquarters with everything you need. We should start with a mobile construction base; then it is necessary to build an energy installation that provides electricity. Next you will need barracks. Then, when you already have the necessary means to attack the enemies and defend yourself, you will be able to establish a choice of weapons and military equipment, as well as establish subsidiary industries in order to have a permanent income.
Secondly, to complete all tasks, you will not only have to work with your fingers on the controller, but also carefully plan the plan for each battle. It is necessary to outwit the enemy and prevent the supply of arms and military equipment from being disrupted for your armies.
Some time you will have mastered the management system. Perhaps, at first it will seem to you that the controller executes commands more slowly than the mouse (on which the control was concentrated in the PC version), but very soon you will remember the abbreviated manipulations of the basic operations, and, in addition, if desired, you can change the configuration conveniently you way.