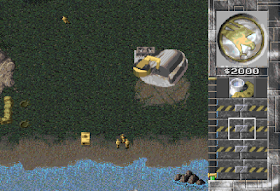 Genre: Strategy / Tactics
Perspective: Bird's-eye view
Visual: Free-roaming camera
Pacing: Real-Time
Interface: Multiple Units / Characters Control, Point and Select
Setting: Africa, Europe, Sci-Fi / Futuristic
Published by: SEGA of America
Developed by: Westwood Studios
Released: 1996
Platforms: SEGA Saturn, PlayStation (PSX, PS1), DOS, Nintendo 64 (N64)
Tens years ago, the storyline of Command & Conquer: Tiberian Dawn not only set the coordinates of the new Westwood Studios franchise (RTS demiurge and the authors of the Dune 2 itself), but also predicted the fate of the entire C & C saga. In the short term, the brand was waiting for a resounding success. In the long - the transformation into the main curse of developers, their pride, but at the same time an expensive yoke, gradually pulled the remarkable people from Las Vegas to the bottom of the debt hole. The value of the C & C-mineral was temporary, and the effect was passing. The peak, taken in Tiberian Dawn, was re-conquered in Tiberian Sun, but subsequent attempts failed - despite all the efforts of Westwood herself and her greedy heiress Electronic Arts.

In terms of gameplay C & C is rightfully considered the most dynamic and copied game in the history of the industry (all heard the words "C & C-clone"). The point is simple: you are immediately given enough resources to build a medium-sized army. Encouraged? Then spam light tanks and infantry and go to crush the mass - in the so-called rush attack. And if you like to smash the enemy with a densely knocked down squad of superunits, then invest in development - and in five minutes you will receive high-tech troops, one kind of which will make the enemy tremble! Despising the inherent "Dune" sense and arrangement, Westwood before our eyes turned the genre into pop music: the vigorous first verse (rapid erection of the base) and the clingy refrain (Mama's campaign a pack of something) made us scroll the melody of the gameplay again and again.Fictional Westwood The Brotherhood of NOD is both a mega-corporation, and a religious sect with extremist views. The brotherhood arises several years after the advent of Tiberium, the first to master the technology of mineral processing, and reveres it for the religious revelation given to humanity from above. In the nineties, business giants were gaining political weight, and the hint of Westwood was obvious.
The leader of the Brotherhood - Kane - the mystifier number one on the other side of the monitor, not without reason, for all 15 years we still did not recognize his surname! Charming, cruel and insidious, Kane is an immortal prophet and the undisputed leader of NOD. Already in Tiberian Dawn, he reveals himself in all the charisma: bursts into the frame, carrying with him both great revelations for followers, and a severe punishment for the enemies - both explicit and imaginary.

The Confederation of GDI, written off, no doubt, with the United States, promotes freedom, democracy and conservative Western foundations, seeing in Tiberium exclusively the global problem of all mankind. Against the backdrop of the religious intentions of the Brotherhood, the GDI motivation always looks fresh. However, here we can also see an analogy with the really existing SDI project - the US defense program designed to protect against Soviet nuclear missiles.And now mix all this into one cocktail - and get two absolutely opposite in ideologies of the pole of power, one ruthless Messiah and a global problem - one for all. This cocktail is Tiberian Dawn. Further, during a lot of continuations, we were expected, in fact, to interpret the same story, but with the participation of CABAL, Scrins, Forgotten, Philadelphia and Kodiak. Grandiose interactive sitcom based on the universe, which, by the way, is not at all compilational, unlike the world of the eternal RTS-competitor C & C - StarCraft.
‹
›
Home
View web version