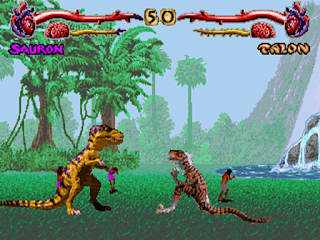 Genre: Action
Perspective: Side view
Gameplay: Arcade, Fighting
Setting: Post-apocalyptic, Sci-fi / futuristic
Published by: SEGA of America
Developed by: Atari Games Corporation
Released: 1995
Platforms: SEGA 32X, 3DO Interactive Multiplayer
An excellent 2D fighting game with lots of gore and other beautiful effects. You can play as one of the animals: dinosaurs or gorilla-like creatures with superpowers. It all started when a meteor shower hit the planet earth. He destroyed almost all technologies, and people regressed into primitive tribes, but not everything on this planet began to fade away, forests began to reclaim their territories, new forms of life began to appear. Various creatures, monsters, similar to prehistoric dinosaurs and great apes, began to divide the territory among themselves. The planet received a new name Urth. Divine properties are attributed to these creatures, and each of them symbolizes a special element, fire, cold, forest, etc. Each of them claims power in this world, four want peace, and three more to plunge the planet into even greater chaos and darkness. Although one of the virtues still prefers, there are people. The game is full of blood and violence, you can choose one of seven characters and start a battle for power. People also participate in combat, you can accidentally hit them, etc. Also, eating people can replenish health and energy. The game also has very interesting Easter eggs where you can play volleyball.
‹
›
Home
View web version