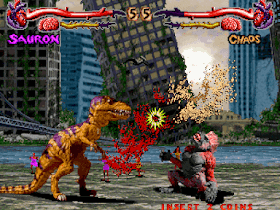 Genre: Action
Perspective: Side view
Gameplay: Arcade, Fighting
Setting: Post-apocalyptic, Sci-fi / futuristic
Published by: Time Warner Interactive Inc.
Developed by: Time Warner Interactive Inc.
Released: 1994
Platforms: Arcade Machine, SEGA Genesis / Mega Drive, SEGA 32X, 3DO Interactive Multiplayer
A brutal fighting game where various prehistoric creatures are represented as fighters, namely dinosaurs and a couple of King Kongs. The plot is that in the near future there was a global catastrophe that destroyed technology and actually plunged the world into a new Stone Age. And it is at this time that the powerful ancient gods get a chance to create a New World from the Old World in accordance with their ideals and worldview. But there are many gods, but the world is one. And only a fierce fight will determine the new God of this world.
‹
›
Home
View web version