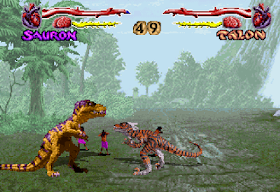 Genre: Action
Perspective: Side view
Gameplay: Arcade, Fighting
Setting: Post-Apocalyptic, Sci-Fi / Futuristic
Published by: Time Warner Interactive
Developed by: Atari Games Corporation
Released: 1995
Platforms: 3DO Interactive Multiplayer, SEGA 32X, SEGA Genesis / Mega Drive, Arcade Machine
Primal Rage is a very popular fighting game and not only for Panasonic 3DO, it appeared on a variety of gaming systems, and got its deserved audience of fans. Primitive rage is a bloody 2D fighting game, in which, as well as in Mortal Kombat there are various finishing moves. In doing so, you can devour people watching the battle. To play is for one of the seven creatures - monsters, descendants of dinosaurs and huge gorillas such as King Kong.
The whole familiar world changed, after meteorites fell from the sky. Almost everything was destroyed, people could not do anything and eventually degraded into primitive tribes. During this time, it is possible that even due to increased radiation other forms of life, more perfect and stronger, developed. Among them, 7 beings were especially distinguished, who were endowed with divine properties. And now each of these creatures will fight for dominance on the planet Urth. In this case, four of them want peace, and three of them will plunge the planet into even greater chaos. Whose side to take, you decide. And now into battle.
In total there are seven dinosaurs in the game:
Chaos is the character with the most vile tricks. Spitting and releasing poisonous gases are the most decent of what he allows himself.
In the training battle you can work out the blows and special moves of the monster you have chosen. The battle of the two monsters continues one round, and the vital force indicator is common for the two opponents (the breakdown of one automatically means the strengthening of the other). The tournament is a series of fights. The tournament reveals the strongest dinosaur.

This feature is only available in dual player mode. If in the bay (at Sauron) one of the players will consistently perform two quick attacks, using "Combo Bycompleting", then there will be two bowing people. The player closest to the player should throw it into the air. The second player must hit the person in the back, pushing him to the opponent before he falls to the ground. If this is the way to push a person for a while, then soon there will be a grid and a judge, and two come will play volleyball.

The hidden game about the skittles

The bowling game is only available in two player mode, at any stage. Both players must play for Armadoya and at the same time three times in a row perform the reception of "Spinning Death" (⇧ + ⇩: ⇦, ⇨, ↓). If it is done correctly, then the game of bowling will begin (as pins are used, you know, people).

In the dual player mode, when you get to the Ruins and one of the participants is Chaos, let him perform the "Sudden Death" reception. After two or three seconds, the same player must perform "Fart of Fury" (⇗ + ⇩: ⇨, ↑, ⇦) so that the cloud remains in the air after the fight time has elapsed. If everything is done correctly, not the meteors, but the cows will fall.
‹
›
Home
View web version