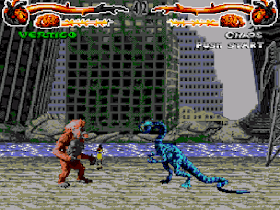 Genre: Action
Perspective: Side view
Gameplay: Arcade, Fighting
Setting: Post-apocalyptic, Sci-fi / futuristic
Published by: Time Warner Interactive Inc.
Developed by: Atari Games Corporation
Released: 1995
Platforms: SEGA Genesis / Mega Drive, SEGA 32X, 3DO Interactive Multiplayer, Arcade Machine
This is a 2D fighting game featuring various monsters, some of which are very similar to dinosaurs. The game takes place in the Primal Rage universe, a devastating meteor shower hit the earth. Technologies stopped working, and eventually disappeared altogether. People degraded and turned into primitive tribes. Civilization has come to an end. This post-apocalyptic world has been named "Urth". In this new world, due to radioactive emissions, a new evolution is taking place. Many new creatures have appeared, but of them all, seven of the most powerful can be distinguished who are fighting for dominance in this new world. They are divided into good and bad. Some want peace on Urth and those who want to throw it into chaos. Each of the creatures has its own unique abilities that relate to some element. For example, fire and ice, life and death. Each of the creatures is considered the god of its element, and the surviving people worship them. There are four good gods and three evil ones.
You have to join one of the parties and defeat many enemies. With each round, the difficulty of the game increases. In the final battle, there will be a battle against all the monsters. At the same time, the strip of lives is not restored after defeating one of the opponents. There is a lot of blood in the game. In order to restore health, you can eat people who worship deities on the playing field. The game has a wide variety of different unique punch combinations. There are fatalities and various finishing moves. Game for 1-2 players.
‹
›
Home
View web version