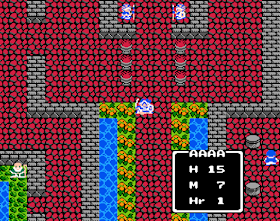 Genre: Role-Playing (RPG)
Perspective: Top-down
Pacing: Turn-based
Gameplay: Japanese-style RPG (JRPG)
Setting: Fantasy
Published by: Enix America Corporation
Developed by: Chunsoft Co.
Released: 1992
Platforms: Nintendo (NES), Super Nintendo (SNES), Game Boy Color (GBC)
There is a lot of content and opportunities in the third part. But some of them are stupid - the world of the game feels less integral than the second part. True, they brought in such an interesting feature as the change of day and night - which changes NPCs in cities and enemies outside of it. There are already four heroes in the squad. But excluding the leader, they became generated dummies - which is again a step back in terms of character development. But you can assign and change classes to them. In general, this is the same fabulous Dragon Quest about good, fighting evil, so which part you prefer is up to you. Aka: Dragon Quest 3 (in Japanese). & Dragon Quest VI (Unl) (in Chinese). There is an improved version of this part of the game on the SNES.
‹
›
Home
View web version