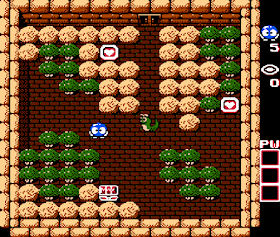 Genre: Action, Puzzle
Perspective: Bird's-eye view
Visual: Fixed / flip-screen
Interface: Direct control
Published by: HAL America Inc.
Developed by: HAL Laboratory
Released: 1989
Platform: Nintendo (NES)
The evil demon Egger kidnaps the love of the protagonist - the princess Lala, no less spherical person. Our responsibility is playing as Lolo, sneaking into the castle, going through all the rooms and floors filled with terrible monsters, and, ultimately, saving our girlfriend.
The peculiarity of the passage lies in the varied behavior of the monsters on the levels. Some just stand, interfering with the passage, others try to catch you after collecting all the hearts, others start shooting when the hero hits their field of vision. To open the door to the next room, you need to do two things: collect all the hearts to open the chest, and then safely get to this very chest. In general, it will not be boring. For the puzzle, the graphics are implemented decently, the high-quality drawing of the main character and many monsters is striking.
It is noteworthy that the Japanese version of Adventures of Lolo was not released. Because of this, the numbering of the subsequent parts of the trilogy is shifted: in fact, "Adventures of Lolo" (J) is the second part of the series, not the first, and "Adventures of Lolo II" (J) is the third.
‹
›
Home
View web version