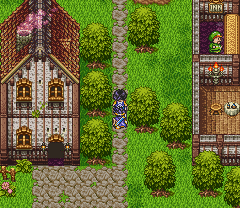 Genre: Role-Playing (RPG)
Perspective: Top-down
Pacing: Turn-based
Gameplay: Japanese-style RPG (JRPG)
Setting: Fantasy
Published by: Enix Corporation
Developed by: Chunsoft Co.
Released: 1996
Platforms: Super Nintendo (SNES), Nintendo (NES), Game Boy Color (GBC)
Dragon Quest III (Dragon Warrior III in the US) was released on NES and was one of the greatest role-playing games of all time. This is another remake, but this time the third part, which obviously will not disappoint anyone. This is one of the brightest shining stars for Super Famicom, which unfortunately did not leave Japan. Graphic design looks beautiful. Animation is perfect. The gameplay is implemented by the old school of role-playing games. It will be necessary to travel through cities and various dungeons, fight monsters and all sorts of other enemies, buy all the necessary things for heroes, relax in a hotel, etc. The protagonist is the 16-year-old son of the famous warrior Ortega, and you must do what your father could not do. At the beginning of the game you are asked questions that determine the nature of the character, what kind of person he will then become and how he will travel around this amazing world of Dragon Quest. In fact, this game has just an epic narrative with many things, making it one of the most perfect games on this system. Graphics in the game is, simply put unmatched. It is very colorful, very detailed, and of course, completely different from the 8-Bit graphics of the original game. There is no reason why you should not play this game.
‹
›
Home
View web version