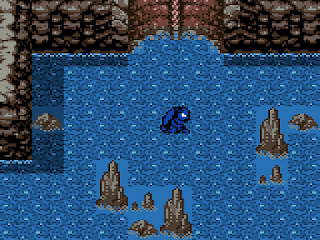 Genre: Role-Playing (RPG)
Perspective: Top-down
Pacing: Turn-based
Gameplay: Japanese-style RPG (JRPG)
Setting: Fantasy
Published by: Enix America Inc.
Developed by: Chunsoft Co.
Released: 2001
Platforms: Game Boy Color (GBC), Nintendo (NES), Super Nintendo (SNES)
The first three Dragon Quest games are part of the same story, and Dragon Quest III is the first game chronologically as well as the third game to feature Loto's hero. The story follows a "hero" tasked with saving the world from the archmage Baramos. Having gathered a group of comrades in a squad, the hero must travel the world, stopping in various cities and places, and get into the lair of the demon lord Baramos.

Dragon Quest III has greatly expanded the gameplay of Dragon Quest and Dragon Quest II. The game uses the basic role-playing mechanics of video games, such as leveling up heroes by gaining experience points and equipping the characters. The combat system is turn-based, as in other games in the series, although the remakes include various interface changes from later games in the series. These include simplified opening of chests and doors, a bag for storing items, quick sorting of items, and a Full HP command to automate the healing process of characters. Dragon Quest III, like its predecessor, is non-linear in structure. Now you can freely change characters in a group, a cycle of changing day and night is presented, in which certain things, characters and quests are available only at certain times of the day.

As in the rest of the games in the series, the plot of Dragon Quest III takes place in a fictional world with a medieval level of technology, but there is magic in the world. During their adventure, the group explores a number of caves, ruins, and castles. Dragon Quest III's geography matches the real geography of Earth to some extent, and many cities correspond to real cultures, for example Romaly is like Rome, Portoga of Portugal, Assaram is like Iraq, and Jipang is like Japan.

Dragon Quest III takes place many years before the original Dragon Quest in the same world. An evil demon named Baramos threatens to destroy the world. The story revolves around the hero, son or daughter (the player can choose the gender) of the legendary warrior Ortega. On the sixteenth birthday of the hero, the king summons him to his castle and instructs him to rid the world of the evil archdemon Baramos, whom Ortega tried to defeat in the past, but died in a volcano. The hero can recruit up to three companions to assist in the fight against Baramos.
The hero leaves his home country to finish the work of his father and defeat Baramos. A large part of the adventure is finding the last two of the three keys needed to open doors throughout the game. After rescuing two residents of the city of Baharat from the robber Kandar and stealing the crown of King of Romaly, the hero receives "black pepper", which he then exchanges for a sailing ship. With the ship, the hero receives the final key and six mystical spheres, which are used to revive the legendary bird Romaly. Romaly allows the hero and his party to travel to the castle of Baramos.
After defeating Baramos in a fierce battle and returning to his home country, but the hero's celebration is interrupted by Zoma, the master of Baramos and the real main villain of the game. Zoma attacks and opens a portal to the dark world, into which the hero jumps. At its core, the dark world is the Alefgard from the previous installments of the series, where the hero must collect several artifacts that were collected in the original Dragon Quest, including the sunstone and the rain staff. The hero rescues the legendary sage Rubiss and receives a sacred amulet for this. The resulting artifacts, as in the original game, allow the hero to create a rainbow bridge leading to Zoma's castle for the final confrontation. With the help of the ball of light, the hero defeats Zoma and frees Alefgard, but Zoma promises that evil will return and the hero will not live long enough to stop him. For his bravery, the hero receives the title "Loto". After that, the hero disappears from Alefgard, leaving his sword and armor, which will be passed down through the centuries, so that descendants can continue to protect the world from evil.
‹
›
Home
View web version