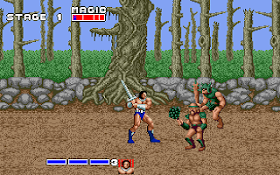 1/2 PLAYERS - selection of the number of participants.
ARCADE - the game on Hard difficulty.
BEGINNER - a game for beginners.
THE DUEL - a duel between two players.
OPTIONS - installation management.
In the lower right corner of the figure in front of a word is the number of available CREDITS credits (4 single-player and 6 for two).
Pressing Esc, you exit the program.
Now tell you more about how to install the control. Menu is called by pressing OPTIONS, has the following positions:
PLAYER 1 PLAYER 2 CONTROL and CONTROL, by clicking on them, you can select the method of control of the player. In addition to choosing a joystick or mouse (mouse control is just wonderful), you can choose two types of control from the keyboard:
And KEYPAD KEYBOARD. KEYPAD for the following keys:
1, 2, 3, 4, 6, 7, 8, 9 - movement in respective directions.
5 - a blow gun.
Ins - jump up.
Right Shift - use magic.
For KEYBOARD keys are:
Q, W, E, A, D, Zt X, C - the movement of the hero.
S - the use of weapons.
Tab - jump up.
Left Shift - use magic.
In addition to selecting the menu management includes:
LIFE METER - number of lives in a loan, from 3 to 5 (the number of stars displayed).
SOUND TEST - check levels of melodies and sounds.
EXIT - exit to the start menu.
In conclusion, the special keys: F3 - switch on / off sound, Esc and Y - yield in the initial menu.
Select and press ARCADE or BEGINNER begins to us ...

Select the number of players and the type of players (can be a warrior, a dwarf or an Amazon), you find yourself in a fairyland, where the main events unfold. Turns out, the Army of Darkness conquered the country and captured the king and the princess, in addition, your best friend was killed in the assault of the capital. The heart of a hero can endure such insolence? And here you are using a sword or ax should explain to the soldiers of darkness, and their owners, which is not good to do so and at the same time to release the king with the princess.
What to do? Just go and beat the enemies when all enemies are killed at this level will open the next one, and so - until the final victory. But, of course, is not so simple, and you do not interfere with some additional knowledge about this game.
Remember the most important thing: all your punches, trapped in the other, causing him damage, as well as enemies, so if you're playing alone, try not to bring the matter to self-destruct. During combat, you can apply some special techniques such as jump up and hit the sword, it is very effective, defeated enemy flies off to the side. If you press the right or left movement twice, the hero enters the run, and if during the run press stroke, the hero will jump and hit the enemy, he also will fly away, and if he is still alive, you will have time to reach it and to finish in the usual way .
An important role in the destruction of the enemies playing magic, its use causes different reactions, a warrior all explodes, the Amazon is a terrible fiery dragon and dwarf - powerful lightning plowed land. However, the result is the same - all the small enemies perish, bigger enemies (they are usually at the end of the level) will die immediately, but killing them will now be easier. From this we recommend to reserve magic to end the level. Magic has a different effect for each character has a corresponding strip called MAGIC, which with the help of small bottles marked current level of magic, the more bottles, the worse enemies. But for every hero has its limits, which reached, increase strength magic stops. And where to get these bottles? During forward from time to time you will come across the little dwarfs, kicking them (by pressing the strike weapon), you can get a treasured bottle. Besides bottles of them can get the food to increase life.
Some enemies ride dragons, throwing the rider, can be used as a weapon and the Dragon, this should just walk up to the dragon and press riderless strike weapon. When the hero sits down on the dragon, instead of hitting a sword or ax, he will beat the enemy dragon. Dragons are smaller and easier to byut turn tail, in the future, there fire-breathing dragon, flames which, oh, how useful you to pass the level.
Number of the current level is displayed in the top right corner after the word STAGE. Passing level, you see a map of the area and the arrow shows where you are now visiting. This game has many levels, and each of them are very beautifully drawn.
At the bottom of the screen blue rectangles painted the remaining number of lives, and the figure next to the portrait shows the number of remaining credits. When the loan is over, most bang for the press to take the next (unless of course it is). When the credits run out and there was an inscription GAME OVER, game over.
Now you have the opportunity to sit and reflect on the causes of failures and, of course, try again and achieve victory over the forces of darkness...