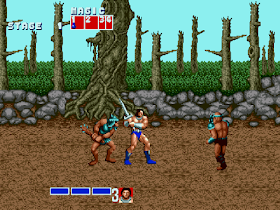 Genre: Action
Perspective: Side view
Visual: 2D scrolling
Gameplay: Beat 'em up / Brawler
Setting: Fantasy
Published by: SEGA of America
Developed by: Team Shinobi
Released: 1989
Platforms: SEGA Genesis / Mega Drive, DOS, SEGA Master System (MS)
It was with this game that the Beet Em Up genre began to blossom in all its glory, after that, such games as "Streets Of Rage", "Kings Of Dragon", "Knight of the Round" and other rubylovs showered. In Golden Ax, the plot, like in other similar games, is written from the bald and tells of a certain bad guy - Death adder'e who attacked the castle and captured the king and queen in captivity. He also soaked very close relatives of our heroes, well, they understandably decided to teach him for this. Here is a tie. Then choose one of the characters and go all to decide. The character is given a choice of three: The dwarf possesses an ax and a huge force in addition, but weak magic, Amazon, is strong in fire magic, but weak physically, and finally the Barbarian is such a strong middle peasant, uses the magic of the earth, and wields his sword well. Each hero can pump his magic by collecting bottles that some small dwarfs bring, they have to kick with a kick then they throw a bottle and throw them out. On the way to the castle in which the king and the queen are kept, there will be a lot to go through, and they will constantly attack. Starting from skeletons, and riders on dragons and ending with huge men and knights with axes and swords at the ready. For such creatures, magic is also needed, but it is desirable to pump it to the maximum otherwise the result will not be particularly effective, and it is not worth exchanging for ordinary dead men, it's easy enough to dunk them. But if it's unbearable for beginners, the beginer mode is provided, where several missions are given Weaker opponents, where you can work out ways to fight against various monsters, after which you are offered to start the main game mode. There are not many receptions, and all of them are done with one button. A simple hitchhiking on the enemies gives a good combo, and if you hold it, then you get a throw. By the way, it's much more interesting to play together, and the number of monsters increases, but there will also be more adrenaline. And for the coolest there is a Duel mode, where you can fight all monsters in the game, and you will have only one life at all! This is definitely a thing for real hardcore players. But in terms of graphics, the game itself does not represent anything special, the enemies are moving all the same, the movement has taken too few shots because of something like everything is sharp - that's a swing and now a stroke, there is no intermediate link and this is not a buzz. Music also pumped up tedious motives throughout the game very much get it, but it's certainly someone like. Sounds too monotonous that the sword hit, that the studded cudgel sound the same. But in general, the game is fascinating and you can kill an hour for it. Especially the two of us.