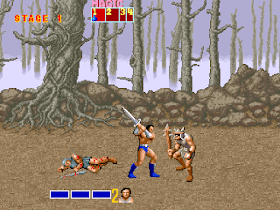 Genre: Action
Perspective: Side view
Visual: 2D scrolling
Gameplay: Beat 'em up / brawler
Interface: Direct control
Setting: Fantasy
Published by: SEGA Europe Ltd.
Developed by: Team Shinobi
Released: 1989
Platforms: Arcade Machine, SEGA Genesis / Mega Drive, DOS, SEGA Master System
The plot takes place in the distant fairy-tale land of Yuri. An evil creature named Death-Adder kidnapped the king and his daughter, while taking possession of the Golden Axe (Yuri's magical symbol). He threatens the people of the country with the destruction of the ax and the king and daughter if they do not recognize him as king.
You are given a choice of 3 heroes:
There is a cooperative system for two people, you can ride a wild animal and defeat the enemy army with it. Do you want to play this mega-game with a friend? Call him and together, using spells and deadly weapons, save the king, his daughter, and crush the Deathbringer! There is also a duel mode.
‹
›
Home
View web version