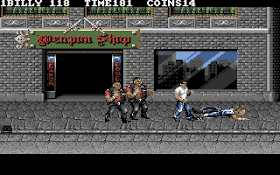 Genre: Action
Perspective: Side view
Visual: 2D scrolling
Gameplay: Arcade, Beat 'em up
Published by: Storm, Tradewest
Developed by: East Technology Corp.
Released: 1992
Platforms: DOS, Arcade Machine, SEGA Genesis / Mega Drive, Nintendo (NES)
The third and last part of the Double Dragon series on PC, which no longer has the "interest" of the previous parts.
The plot, unlike the first two games, is very strange and incomprehensible: the brothers, returning from the martial arts championship, learn from a fortuneteller about a terrible evil in Egypt, which only they can stop, but before that it is necessary to visit other countries (Italy, Japan ). Not very clear, in a word.
In this game, the role of bonuses has dramatically increased - now there are entire shops where you can buy weapons and all kinds of "power-ups" that can temporarily grant our heroes increased strength, endurance and speed. But about the bonuses "just like that" that lie on the road, you have to forget - here you can only collect money from the bodies of killed enemies, and then look for a place where you can buy something on them. It is clear that this is more realistic, but here it is clearly not good. The combat system of the second part was abolished, again they returned to simple single strikes of the first.
The graphics have improved again, the characters and backgrounds are drawn very clearly and beautifully, and sometimes even a hint of three-dimensionality appears, but this does not bring much joy. If we consider this game simply as an independent work of the arcade genre, then it can be estimated at least above average, but as a continuation of the great series - alas, one disappointment.
‹
›
Home
View web version