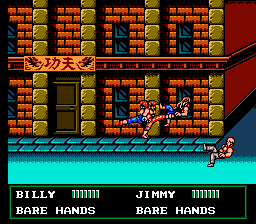 Genre: Action
Perspective: Side view
Visual: 2D scrolling
Gameplay: Beat 'em up / Brawler
Published by: Acclaim Entertainment
Developed by: Technos Japan Corp.
Released: 1991
Platforms: Nintendo (NES), Arcade Machine, SEGA Genesis / Mega Drive, DOS
The fortune predictor tempted Billy and Jimmy Lee with the opportunity to track down the three Rosetta Stone before they were seized by the forces of evil. With whom only you do not have to fight: from a trivial skinhead idiot-brother in the American manner to an Egyptian mummy with the habits of a fire-worshiper.

Button A - punch.
Button B - kick.
After hitting three punch punches or one kick kick, jerk towards the enemy by pressing the corresponding button on the D-pad, and then the Submission Hold.
In this capture, press the A or B button to inflict various and very painful blows to the enemy on the head.
Buttons A + B - jump.
After completing the jump, press the A or B button at the moment of landing and perform a jumping attack with a kick of the Jump Kick. After making a jump, press the A or B button at the top of your flight and execute the Syslone Spin Kick attack as quickly as possible. This attack will help you out in the most difficult situations.
Jump forward, and then press the A or B button in the initial phase of the jump. Thus, the Head Grap attack is executed. Generally speaking, the attack is not very effective, but it looks amazing.
Wall Jump. Jump Jump kick directly into the wall, as a result, push away from it and fly off the ricochet. If this happens, you will inflict terrible damage on him.
Double Attack. As you understand, it is only performed in the mode of two players (2 player A mode), because if you try to hold it in mode B, then just apply decent damage to each other.
So, the double attack Team Jump Kick. How it looks you will see immediately, as soon as you attack several enemies. You just need to perform a jump Kick attack against your brother Lee Brother, and he will hurl you back with a terrible force. You will cut yourself into enemies, and they will not be well.
Super Cyclone Spin Kick. This attack is extremely difficult to perform, exact timing is required, as both players must jump and perform the Cyclone Spin Kick attack at exactly the same moment. Then Billy and Jimmy grab each other by the arms and start spinning like a mill, demolishing and destroying the enemies literally with one blow. In the two-player mode, there is no more powerful reception.
‹
›
Home
View web version