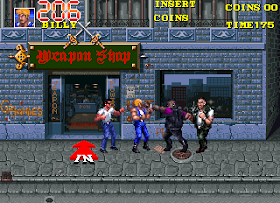 Genre: Action
Perspective: Side view
Visual: 2D scrolling
Gameplay: Arcade, Beat 'em up / Brawler
Published by: Technos Japan Corp.
Developed by: East Technology Corp.
Released: 1990
Platforms: Arcade Machine, SEGA Genesis / Mega Drive, Nintendo (NES), DOS
The arcade version is a game in the genre beat 'em up. The game features five levels located in several countries (U.S.A., China, Japan, Italy, Italy, Egypt). Levels are made in the form of locations using isometric projection.
The task of the game is to find lost Rosetta Stones.
As in the previous games of the series, the characters Billy and Jimmy Lee move through the levels, for a certain time, destroying the attacking groups of enemies; at the end of each level is the boss. Also at the levels are shops where you can buy useful items (such as weapons).
Enemies in the game are quite numerous and individual for each level.

In this version of the game you are given two additional characters. They can be selected from the characters menu, or they will switch automatically when you die. But if all the characters are killed, you will lose. But you will be given another continuation in the penultimate and final level. Every character has only one life.
Billy / Jimmy Lee - The main characters of the game (Billy - blue, Jimmy - red). In the single-player mode, only Billy appears, and in the two-player mode, the 2nd player controls Jimmy, but in the choice of the character, they can be swapped. In each level they can use nunchuck.
Chin Seimei - Boss of the second level (will join you after defeating him), martial arts master; causes great damage, but it is slow. Can use the weapons of enemies.
Yagyu Ranzou - Boss of the third level, Shinobi of Japan (will also join you after defeating him). Fast and agile. He uses katana.
‹
›
Home
View web version